Pumpkin is not just used to decorate for Halloween in November. These three homemade pumpkin soup recipes offer a good quantity of nutrients. 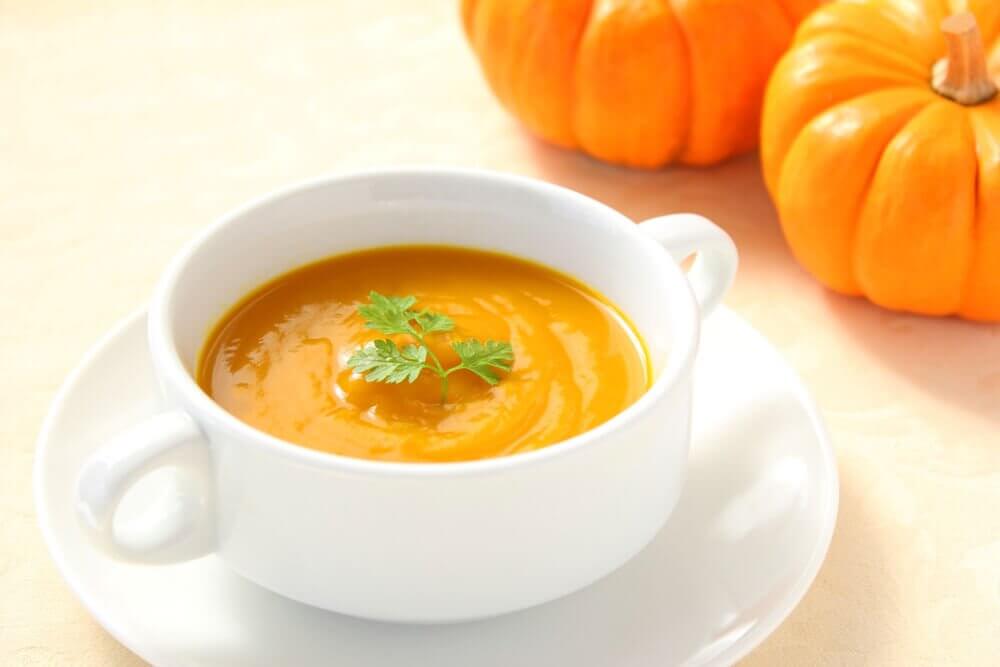 Pumpkins are rich in fiber and low in calories.

They produce a feeling of satiety and have a lot of water that helps in hydration. Because of this, they help in weight loss. Plus, they even reduce levels of glucose in the blood and increase insulin.

Finally, the high vitamin C content in pumpkins prevents colds and helps in recovering from colds. Both vitamins are a protective shield against free radicals.

Let’s take a look at some pumpkin recipes!

3 Recipes for Cream of Pumpkin Soup

1.Peel the pumpkin and cut into cubes. Cut off the tops and bottoms of the carrots, peel and cut into 1/2 inch slices.

2. Wash the leek and cut into slices. Set aside one slice. Peel the potato and cut as if to fry.

3. Heat water and add the vegetables.

4. Add the olive oil and 1/2 teaspoon of salt and heat on a medium setting for 20 minutes.

5. Then, beat with an electric mixer until you get a cream.

6. To serve, cut the rest of the leek into fine pieces and sprinkle on the surface.

We recommend: Which vegetable cream soup is the healthiest?

1.Place all of the clean and cut vegetables in a pressure cooker.

2. Cover with water, add a dash of olive oil and salt to taste.

3. Then, cover and allow to cook on medium heat for 20 minutes.

5. Mix it together with the cream and olive oil. If it’s too thick, add a little bit of broth.

3. Cream of pumpkin and broccoli soup

Preparation for the broccoli

1.Prick the leeks and zucchini with a fork and place in a pan.

2. Add the washed broccoli, but save some stems.

3. Add the peeled and cut potato.

4. Cover the ingredients with water and add a the spices.

6.  Then, stir, add a pinch of salt and pepper, and put aside in a container.

Preparation for the pumpkin

1. Cut the onion, the carrots, and the pumpkin into small cubes. Put some of the pumpkin pieces aside.

2.  Peel the other potato and cut into pieces.

3. Put all of the ingredients in a pot, season and cover with water.

5. Then beat, adding a pinch of salt and pepper and put aside.

1. In a mortar and pestle, crush the toasted corn kernels.

2. Place in a pan with the curry and a dash of oil. Mix and set aside.

3. Put the saved broccoli and pumpkin in boiling water for a few minutes. Drain and save.

4. In a bowl, mix the two creams together, one on each side until they meet in the center of the bowl.

6. Place the corn dressing on the line in the middle that separate the two and serve.