The Truth about Soft Drinks

Soft drinks contain substances that make them addictive, which makes you want to drink more. 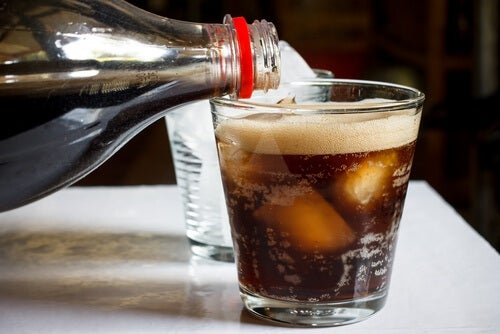 Soft drinks (carbonated beverages) are really popular around the world. In some areas, like the United States, they actually often cost less than water!

What the majority of consumers don’t know is what’s actually in them. In this article, you’ll learn about the compounds in the soft drinks you enjoy with your meals.

Warning: after reading this, you may not want to drink them anymore!

How Are Soft Drinks Made?

These drinks are made using different chemical processes.

Nothing natural goes into them. They contain refined sugar, flavorings, artificial dyes (these three substances account for 90% of the bottle), in addition to caramel, caffeine, additives and preservatives derived from tar (yes, you read that correctly).

The composition of colas, for example, is made with acids, mainly carbonic and erythorbate. The names sound just as horrible as they actually are. This is what you’re putting into your body and giving to your family!

Some of the not so widespread uses of cola drinks will make you realize just how damaging they are to your health. They include:

It removes scale and stuck-on dirt on the sides of the toilet.

Mechanics use this drink to remove corrosion from battery terminals.

The acids contained in colas are first class solvents.

Here’s another way that mechanics use soft drinks.

Whether in the car or the windows in your home, a little bit of soda can even clean your windows.

What Else do Soft Drinks Contain?

Yes, there are still more hidden surprises and secrets to reveal.

Are you ready? You’ll be surprised!

Phosphoric acid, for example. It’s a powerful corrosive agent that attacks the teeth first, then when it enters the body, “it has its way” with the stomach and the liver.

Plus, it’s the cause of many digestive, liver and intestinal problems and illnesses. It’s a silent enemy that many do not realize is really dangerous.

Several studies have revealed that this acid is carcinogenic. When combined with large quantities of sugar and caffeine it causes:

Why do We Drink Soft Drinks if They’re so Bad for our Health?

In the first place, because we don’t know any better. The same thing happens with the food we eat every day, whether it’s taken out or the semi-prepared food we fix at home.

If people truly knew the negative consequences of drinking these beverages, many would immediately stop buying them and perhaps even production would lesson or stop.

For now, we can start with ourselves by not consuming these harmful drinks or offering them to our loved ones.

Second, because they’re so addictive, soft drinks are purchased and treated like water or something good to share. Children are the first to ask their parents to buy a bottle at the store or when they eat out.

Third, because the advertising we see in the media depicts drinking certain soft drinks as “being trendy”, “enjoying an afternoon with friends”, or “being happy with the family.” Naturally, this just isn’t true.

In reality, there’s a huge debate on the production and commercialization of these drinks. Corporations grow rich by deteriorating their clients’ health (as happens, for example, with the tobacco industry, one of the biggest in the world).

What Happens to Our Bodies When we Drink Soft Drinks?

A really interesting study shows the effects that the famous drink with the red label and white letters have on the human body after drinking it.

Do you want to know what they are?

Next time you reach for that soft drink, think about this.

5 Unhealthy Foods to Avoid After Working Out
Oftentimes, we eat poorly because we do not know what we're doing. Eating foods after working out should be something that you need to pay attention to. Read more »
Link copied!
Interesting Articles
Did you know?
New Year's Traditions Around the World