Trigger finger is a problem that can affect hand movement significantly. It's best to consult your health care provider when the first symptoms appear in order to improve the prognosis. 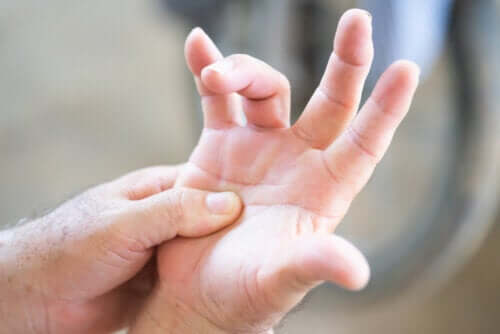 Trigger finger is a condition that limits the movement of the finger and may prevent it from flexing. In fact, it usually gets stuck and, to stretch or flex it, you have to snap it, like a spring does when it stretches and is then released.

A problem in the long tendons, also called flexors, causes this anomaly. These tendons slide through a kind of tunnel–the tendon sheath–that surrounds them. When that sheath becomes irritated and inflamed, then the tunnel narrows and makes movement difficult.

In the most severe cases, the trigger finger locks in the flexed position and can’t move. Another name for this condition is stenosing tenosynovitis, and it’s more common in women and those with diabetes.

The trigger finger can occur in any finger of the hand, including the thumb. In fact, it almost always affects more than one finger, even on both hands. The condition is progressive and usually begins with persistent pain at the base of the finger.

The initial symptoms of trigger finger are usually as follows:

When trigger finger progresses, it remains stuck in the flexed position and stretches suddenly. In more advanced stages, it gets stuck and can’t stretch again.

The basis for the diagnosis of trigger finger is a physical examination by the physician. When the patient makes a movement in the affected area, it makes a click, which is characteristic of this abnormality.

The physician will complete the physical examination by asking the patient to open and close their hand. The professional will also check the palm and the base of the fingers, inquiring about the manifestations of pain and the signs of blockage. After this, it’s possible to confirm the diagnosis.

The treatment of trigger finger depends on the condition of the finger and the time that’s elapsed between the onset of the disease and the doctor’s visit. Generally speaking, there are three ways to address it: medication, therapy, and surgery.

You may also want to read: Natural Remedies for Carpal Tunnel Syndrome

The use of drugs helps to relieve pain and reduce inflammation, thus facilitating movement. In general, doctors prescribe non-steroidal anti-inflammatory drugs, such as ibuprofen, naproxen and other similar drugs. This measure serves to improve the symptoms, but doesn’t solve the problem.

Trigger finger can also be treated with therapeutic physical therapy measures, such as the following:

When medication and therapy don’t work, surgery should be performed. Sometimes the following procedures are tried before surgery:

If these procedures don’t work, then the patient will require surgery. This is an outpatient procedure that consists of an incision in the compressed area to cut the tendon sheath. The greatest risk is infection or ineffectiveness of the operation.

There are some people who tend to develop trigger finger more easily. The known risk factors are as follows:

A condition with various treatments

Trigger finger is a condition that can significantly alter the quality of life. Therefore, the most advisable thing in these cases is to adapt to the new conditions, avoiding gripping movements. If those movements are impossible to avoid, then it’s important to evaluate efficient protective measures.

It’s important to note that none of the available treatments are one hundred percent effective. However, a high percentage of patients improve after injections with corticosteroids, and there are also successful resolutions with surgery. So, the outlook is good.

Corticosteroid Drugs: What Are They?
There's a wide variety of applications for Corticosteroid drugs due to the number of physiological processes they can impact. Read more »

Link copied!
Interesting Articles
Illnesses
Eczema and Stress: How Are They Related?