Trazodone: Everything You Need to Know

One of the disadvantages of trazodone compared to other types of antidepressants, such as selective serotonin reuptake inhibitors, is its dosage regimen. In this regard, trazodone must be taken several times a day. 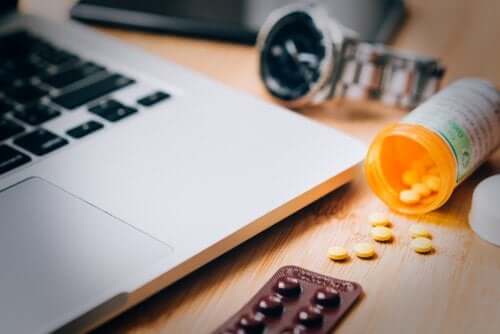 Trazodone is part of the group of antidepressant drugs. It specifically belongs to the family of second-generation tricyclic antidepressants. As its name suggests, it’s very effective in the treatment of depression.

However, trazodone is also indicated to treat other conditions such as insomnia and some anxiety disorders. Doctors can administer it as monotherapy or in combination with other medications, as indicated by the physician.

It can also be used as adjuvant therapy in some psychiatric disorders, such as mania, Tourette’s syndrome, or schizophrenia, although its efficacy in treating the latter is still under study.

In short, this tricyclic antidepressant has been attributed anxiolytic, sedative, and hypnotic properties. It was synthesized in 1966 in Italy and approved by the FDA in 1982.

How does trazodone work as an antidepressant drug?

In addition to being a second-generation tricyclic antidepressant, as we’ve mentioned, it’s also classified among the antidepressant drugs that exert a dual action in the body to achieve its therapeutic objective.

In this sense, it has an agonist action on serotonin 5-HT2a receptors and, at the same time, inhibits the reuptake of this neurotransmitter, which is also implicated in clinical depressive symptoms.

However, the mechanism of this drug still isn’t known with certainty, since some authors suggest that the main mechanism of action of trazodone is established presynaptically and involves a serotonin transporter.

On the other hand, trazodone has no effect on cholinergic receptors, unlike many other antidepressants. Thus, it’s exempt from triggering the adverse effects associated with the activation of this type of receptor.

One of the disadvantages of trazodone compared to other types of antidepressant drugs, such as selective serotonin reuptake inhibitors, is its dosage regimen. In this regard, the patient must take trazodone taken several times a day. In contrast, SSRIs require only one daily dosage to trigger their antidepressant action.

The price compensates for this disadvantage, which is considerably lower than that of SSRIs. Generally, doctors prescribe an initial dose of 150 mg per day  and then gradually increase it according to their studies.

Also read: How to Overcome Depression Due to Infidelity

Trazodone, like all drugs on the market, isn’t exempt from producing a series of side effects when starting treatment with this drug.

The most common adverse reactions with the treatment with this drug are the following:

In addition, researchers have also reported cases of hepatic toxicity in clinical trials conducted with this drug when administered to patients for prolonged periods of time.

The adverse reactions most frequently occur when doctors administer this drug in very high doses. Therefore, researchers should carry out further studies in order to try to reduce the doses in long-term administrations, obtaining good clinical efficacy and reducing adverse effects.

This disorder occurs when doctors administer drugs that increase serotonin concentration, such as trazodone (tricyclic antidepressants) or other antidepressants in high doses. This syndrome is highly dangerous as it can lead to the patient’s death. Therefore, it’s essential not to self-medicate or take more than the dosage indicated by the physician.

A series of symptoms characterize serotonergic syndrome. Some of these are:

These side effects are due to a pharmacodynamic interaction, which is the product of common actions on the same neurotransmitter system, and pharmacokinetic interactions of cytochrome isoenzyme competition. Thus, it considerably increases plasma levels of antidepressants.

Discover: All You Need to Know About the Drug Celecoxib

Trazodone belongs to the family of tricyclic antidepressants. You should be extra careful with this type of medication and never self-medicate. Misuse of trazodone can lead to the death of the person involved. Always follow your doctor’s instructions and be careful with what you put in your body!