Topiramate: Uses And Side Effects

Unlike other anticonvulsant medications, topiramate appears to block the propagation of seizures more than increasing the seizure threshold. Learn more about it in this article. 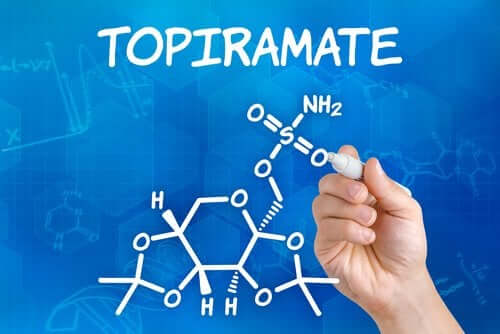 Topiramate is a medication that belongs to the antiepileptic drug family. Patients usually take it orally for the treatment of epilepsy.

In addition to epilepsy, which we’ll discuss later on, it’s also used for treating Lennox-Gastaut syndrome, as well as refractory epilepsies including infantile spasms associated with West syndrome.

Moreover, topiramate is also a mood stabilizer, used in treating borderline personality disorder. In some instances, patients take it to treat depression, among other disorders.

Topiramate was first synthesized in 1980. However, it wasn’t until 1995 that it gained approval for use as an anticonvulsant medication for treating epilepsy in both children and adults.

Epilepsy is a disease that affects the central nervous system and causes brain activity to malfunction.

In this way, the patient can have seizures or exhibit periods of odd behavior. They might also experience strange sensations. In some cases, the patient could even lose consciousness.

There are two main types of seizures:

The symptoms of epilepsy vary according to the type of epilepsy a patient suffers from. When a person has a seizure, if it reoccurs, then it’ll normally be the same type. In this way, the symptoms will be similar between one episode and another.

How does topiramate produce its effect in the body?

GABA and other neurotransmitters such as adrenaline and serotonin are chemical substances produced by the body. Their purpose is, therefore, to transmit signals from one neuron to the next. Depending on the neurotransmitter in question, neurons transmit one or another type of impulse, thus triggering a cascade of various signals.

When neurons secrete GABA, it produces an inhibitory signal and a reduction in nerve impulses. In this way, this neurotransmitter plays an important role in behavior, cognition, and the body’s response to stress.

Unlike other anticonvulsant medications, topiramate appears to block the propagation of seizures more so than increasing the seizure threshold.

In short, topiramate appears to have multiple mechanisms of action that explain its efficacy in patients with seizures that don’t subside with the use of other medications. It’s a pharmaceutical with a long duration of action and a wide therapeutic margin.

Also read: Diagnosis of Epilepsy in Childhood and its Causes

Side effects of topiramate

Topiramate, like all commercialized medications, can cause a number of side effects that you should keep in mind.

Other adverse effects that have been documented are:

Discover: Epilepsy and Pregnancy: Everything You Should Know

In conclusion, topiramate is a commonly-used medication. Doctors prescribe it for treating tonic-clonic seizures and epilepsy. Patients also take it to treat Lennox-Gastaut syndrome and other refractory epilepsies.

Additionally, it requires a doctor’s prescription, and can trigger a number of side effects. Using topiramate incorrectly can cause serious health complications.

For this reason, we recommend that you stick to your doctor’s instructions. Turn to your doctor or pharmacist with any concerns you have about this medication.

Epileptic Seizures: What Should You Do?
Epileptic seizures, especially if they're severe, require external help to prevent the affected person from hitting themselves and to help them breathe correctly. Read more »
Link copied!
Interesting Articles
Medication
Characteristics and Uses of Flumazenil