Thyroiditis is the inflammation of the thyroid. When you suffer from such problems, it can have both mental and physical effects. Read about them here. 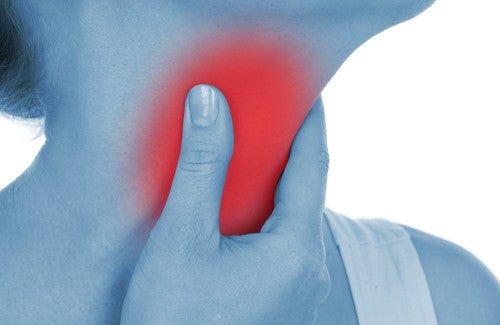 This gland, located in your neck, is responsible for regulating the rate at which you burn calories and your heart rhythm. Beyond that, though, and perhaps most importantly, it regulates the way in which your cells use energy for their vital processes.

See Also: Discover How Many Calories You Should Eat Per Day

Among people with thyroiditis, most show symptoms of hypothyroidism. People with de Quervain’s thyroiditis are the exception. They mostly demonstrate hyperthyroidism. Nevertheless, what they all have in common is that their thyroid glands become inflamed.

The treatment for thyroiditis depends on the variety that afflicts you. In general, almost all treatments try to alleviate and eliminate inflammation so that the thyroid can recuperate its normal working rhythm.

Allopathic medicine may include anti-inflammatory medication for pain, such as aspirin, ibuprofen, or prednisone.

Chinese medicine works with herbs like ginseng, ginger, or mint. Some people claim it has obtained good results with regard to thyroid function.

For hypothyroidism, natural medicine uses ashwagandha (Indian ginseng) and guggul, both of which help the thyroid produce its hormones. Maca is recommended in the case of menopause.

With regard to the dietary deficiencies that thyroiditis may create, it’s important to remember that thyroid functioning is dependent on iodine.  In Europe, people customarily to consume iodized sea salt, but this nutrient is often lacking in the American diet.  To take in the appropriate dosage of iodine, it is a good idea to eat iodized salt or sea vegetation, like seaweed. Some experts say it’s better to consume iodine through food consumption than as a supplement. Even so, there are also cases where the iodine you get through food alone is insufficient.

Though the cause is unknown, it seems to have a genetic source.

It is autoimmune by nature, which means that the body produces defensive cells (antibodies) against the cells of its own thyroid, attacking them.  The gland then becomes inflamed and the cells are destroyed little by little, causing hypothyroidism due to the reduction of the thyroid hormones.

More than being a direct treatment, it’s a program you can follow to help the body fight against this illness.

2. It’s possible that erradicating gluten from the diet can help reduce the level of autoantibodies to normal levels in some people. This takes a period of 3 to 6 months.

3. If the levels of autoantibodies are elevated, it’s especially important to avoid iodine: no more than 1,000 mg/day.

4. Vitamin D helps regulate the immune system: you should regularly get a little time in the sun.

5. Reduce stress, since it releases cortisol, which impedes the activation of thyroid hormones by suppressing the thyroxine 5-deiodinase enzyme.

6. There are illnesses that increase the adrenal secretion of cortisol, such as liver diseases, hypoglycemia, insulin resistance, etc., so it is imperative to correct them.

7. Detoxify the body from things that could cause toxicity, such as pesticides, solvents, chemicals, or heavy metals.

8. Selenium helps reduce the level of antibodies working against the thyroid and promotes the conversion of T4 (reserve hormone) to T3 (active hormone).  It plays an important role in thyroid function, and reduces the risk of nodules.

9. Correct, if they exist, iron, Vitamin B12, or folic acid deficiencies.

10. It’s also important to do some sort of light or moderate exercise, without straining yourself, and to get a good night’s sleep as often as possible.

This thyroiditis most likely has viral origins. It usually comes together with neck pain, as opposed to the previous variety. The symptoms of hyperthyroidism initially develop and last from 1 to 3 months, followed by normal functioning.  However, if you contract this variety, you may sometimes end up with permanent hyperthyroidism.

Hyperthyroidism occurs when the thyroid produces more hormones than usual and thyroid hormone levels in the blood are elevated.  Among the symptoms may be found:

To combat the onset of such symptoms, it may be helpful to drink a combination of green tea and lemon balm. Drink twice a day. Its antioxidant content might help improve your thyroid hyperactivity.

Following pregnancy in some women, some antibodies may remain in the body that attack the thyroid. This tends to occur 4 to 6 months after having had the baby, in general. This can produce either type of thyroiditis – hypo- or hyperthyroidism.

It’s similar to those mentioned previously. The difference is that it may appear in both genders and its cause is unknown.

Thyroiditis caused by medications or drugs

This condition can be a side effect of some medications like lithium, amiodarone, interferons or cytokines.  They cause hypo- as well as hyperthyroidism and only subside when the intake of the medications stops.

It presents itself during treatments with radioactive iodine for hyperthyroidism or in patients in radiotherapy for treating certain types of cancer. Hyperthyroidism symptoms may develop.

Provoked by bacteria or other infectious microorganisms. The symptoms vary.  It may or may not be painful, and the person affected often feels sick from the infection.  Upon treating the infection, the symptoms (usually those of hypothyroidism) disappear.

Some people say that acupuncture can improve thyroiditis symptoms. This alternative medicine treatment is rooted in traditional Asian medicine. Some countries, such as Norway, offer it in some hospitals.

Basically, acupuncture works to reorganize and balance the metabolic system in general.  This forces the thyroid gland to function correctly.

When you use acupuncture to relieve pain in certain zones of the body and cause a relaxing effect, it may act upon your brain, stimulating its activity and hormonal production.

Some people claim that acupuncture improves the symptoms cause by thyroiditis.

Cure Intestinal Infections with Three Natural Remedies
Intestinal infections are caused by viruses, bacteria, as well as by not correctly washing your hands after having gone to the bathroom. Read more »
Link copied!
Interesting Articles
Illnesses
Gilbert's Syndrome: Symptoms and Treatment