Thiopental: How it's Administered and Precautions for Use

Thiopental is an anesthetic drug. It belongs to the family of barbiturates and is also known as sodium thiopentate. 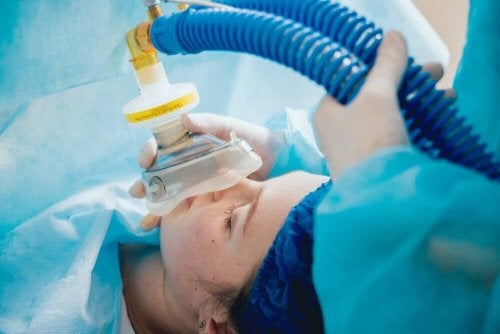 Thiopental is a general anesthetic. This substance is a barbiturate, or a drug that acts as a central nervous system depressant. Therefore, barbiturates are commonly used as sedatives and pain killers. Thiopental is also commonly called sodium thiopentate, since it comes from thiobarbituric acid.

Nowadays, the medical field uses thiopental less and prefer to use other drugs that have less side effects. After its use, many patients commented that after waking up from anesthesia, they felt slow and slightly disoriented. In fact, almost everyone compared it to a hangover after drinking too much alcohol.

In any case, it’s an very short-acting medication. Scientists conducted experiments to investigate if thiopental could effectively induce a state of hypnosis in a patient. However, the scientific and medical community ultimately decided that thiopental proved ineffective in these experiments. Thus, the medical field has continued to only use it as a short-term anesthetic that lasts a few minutes.

The Active Agents in Thiopental

Thiopental, like all barbiturates, binds to GABA receptors. Although the receptor sub-type is different, the acting agent in thiopental is the same as other relaxants, such as benzodiazepines.

When the substance binds to the receptor, they form a binding complex. This regulates the transmission of information to the central nervous system.

The sedative and anesthetic effect occurs because of this regulation. In addition, thiopental also acts as an anticonvulsant. This is because – in the event of convulsions or seizures – it blocks them from transmitting to the neurotransmitter GABA.

During this sedation, a person enters a state of calmness that reduces brain metabolism. Since nutrient needs are very low in this state, blood supply also decreases. Thus, it also serves to reduce blood flow and, with it, intracranial pressure.

Discover: Your Guide to Anti-Anxiety Medications

Overall, a quick way to know if thiopental is being used is to check and see how the doctor is administering it.

Often, they administer the drug through tracheal intubation or through the placement of plastic tubes in the trachea through the mouth.

That said, the most interesting aspect about thiopental is that when they deliver it at very low doses, it stops the pharyngeal reflex. This makes it a good option for mouth, throat or breathing problems. Naturally, this is especially useful in emergency situations where the patient is not breathing properly. The same goes for situations in which s/he has suffered some type of trauma to the mouth in which blood or foreign objects (debris, teeth, etc.) makes it difficult to see the path for inserting the tube. Overall, these cases usually require inhalation anesthesia.

Doctors and specialists also use it as a general anesthetic for short periods of time.

However, as we mentioned earlier, the medical field uses it less and less. Now, they usually prefer to use other anesthetics. Of course, there’s a reason for this. Thiopental is an anesthetic and sedative. However, it doesn’t act as a pain killer. Instead, it only relaxes and sedates the patient.

Nevertheless, there are specific situations where it can be an option. For example, doctors may use it during neurosurgery for patients who have suffered head trauma or have refractory cranial hypertension. In addition, doctors and nurses will also administer it to psychiatric patients who have seizures and do not respond well to other treatments.

Below, you’ll find a list of various factors and conditions when thiopental should not be used:

Administration of the Drug

Overall, doctors almost always inject thiopental is almost also injected into the veins. However, this is unless they decide to use it as inhalation anesthesia through tubes.

The dosage varies. However, it’s typical to inject 2-4 mg/kg of body weight. Nevertheless, they do this taking into account that this dose is variable and that each person has a different sensibility. Therefore, they  should always first administer it at the lowest amount and increase it little by little.

Generally, thiopental affects the patient one minute after administration. However, it only lasts a few minutes if they do not stabilize it with a maintenance dose.

The FDA Approves a New Medication to Prevent Migraines
An innovative drug was recently approved by the FDA. These are injections that have the ability to prevent migraines and are applied on a monthly basis. Read more »
Link copied!
Interesting Articles
Health
Curious Aspects of Saliva