The Uses and Side Effects of Paroxetine

This antidepressant has the ability to increase serotonin concentration. Discover more about the uses and side effects of paroxetine in this article. 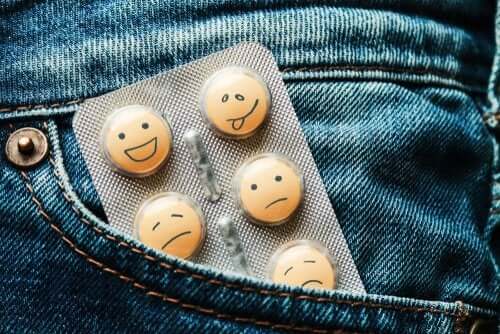 Paroxetine is a drug that belongs to the family of serotonin reuptake inhibitor (SSRI). These drugs are antidepressants widely used for the treatment of several conditions such as clinical depression, obsessive-compulsive disorder, social anxiety disorder, and generalized anxiety disorder, among others.

Serotonin reuptake inhibitors can increase the synaptic concentration of this neurotransmitter in the nerve endings. Nevertheless, we’ll look at the mechanism later on in more detail. It’s a drug that’s analogous to fluoxetine, one of the most representative drugs of this group of antidepressants.

Paroxetine was marketed in 1992 by the company currently known as GlaxoSmithKline.

However, it’s interesting to note that the US Department of Justice imposed a fine on this company because it promoted the use of paroxetine in minors. Another cause behind the fine was that the company prepared an article where it falsely reported its effectiveness in treating depression in adolescents.

Depression is an emotional disorder that causes a feeling of constant sadness, as well as a loss of interest in different activities. Thus, this disorder, also known as major depressive disorder or clinical depression, affects the following:

Depression is a serious illness, not a feeling of passing sadness. It can even cause sufferers to commit suicide. However, even though treatment may take several years, it’s possible to overcome this illness.

As for the causes, it’s important to mention that, except for some cases in which depression develops secondarily to other diseases such as Parkinson’s or tuberculosis, there’s normally a combination of factors that trigger depression. Among them we can mention:

What are the effects of paroxetine on the body?

Paroxetine boosts serotonin in the central nervous system. However, unlike other antidepressant drugs, it doesn’t affect the concentrations of other biological amines, such as noradrenaline.

Despite knowing this information, the precise action of paroxetine is not yet clear. Nor is that of the other antidepressant serotonin reuptake inhibitors.

Serotonin is, as we’ve seen, a neurotransmitter of the central nervous system. Specifically, it’s in charge of regulating moods and many people know it as the molecule of happiness. Research has linked low levels of serotonin to the development of depression. Therefore, paroxetine, by inhibiting its reuptake, makes more neurotransmitters available to trigger its effects.

You may also be interested in reading: Depression in Friends; How to Detect It

Side effects of paroxetine


Paroxetine, like all drugs on the market, can produce several undesirable effects for the patient.

Among the most common are the appearance of nausea and vomiting in 25% of patients and constipation or diarrhea in 16.5%. Due to these effects, 20.9% of patients undergoing treatment with paroxetine abandon treatment.

However, if the patient continues with the treatment, they usually get used to some of the gastrointestinal problems. In fact, they may even disappear. However, there are others, such as dry mouth, which may persist.

On the other hand, it’s important to mention that taking paroxetine along with other drugs that also increase serotonin levels can trigger serotoninergic syndrome, which produces the following symptoms:

Paroxetine is a drug that doctors prescribe for the treatment of depression. It owes its antidepressant effect to its capacity to increase the concentration of serotonin, a neurotransmitter that intervenes in people’s moods and whose deficit favors the appearance of depression.

Consult your doctor or pharmacist if you have any doubts about this medication and follow the recommendations they give you to try to avoid adverse effects and possible complications.

5 Useful Ways to Handle Depression
It's good for people to be aware of some habits and strategies that can help people handle depression and deal with its symptoms. Read more »
Link copied!
Interesting Articles
Medication
Cortisol Hormone: What is Hydrocortisone?