The Symptoms and Treatments of Fragile X Syndrome

Fragile X syndrome is widely recognized as the most common inherited intellectual disability. Find out all about it in this article! 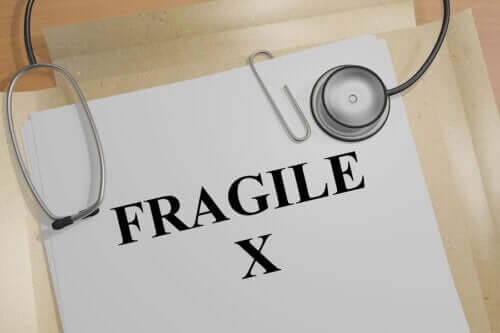 Fragile X syndrome is a hereditary genetic disorder that affects intellectual capacity. As such, it’s a disease that poses challenges for both the sufferer and their family.

This syndrome is the most common form of inherited intellectual disability. One in four thousand men and one in six thousand women suffer from it. The difference between men and women is explained partly by the genetic make-up of each sex. While women have two X chromosomes, males only have one, as the other is the Y chromosome. Because of this, the alteration may not cause obvious symptoms in women.

Therefore, it’s important to consider that if the affected gene is one of the X chromosomes of a woman, the other chromosome can compensate for this deficiency because it contains the same gene. Thus, women may have milder signs of the disorder or simply be carriers without it ever manifesting.

The affected gene in fragile X syndrome is FMR1. Since it’s damaged, it doesn’t produce FMRP correctly or may not ever produce it. Thus, the following symptoms manifest:

Fragile X syndrome has no cure. However, once diagnosed, it can be treated with rehabilitation therapies. Nevertheless, the problem still cannot be completely reversed.

The symptoms of fragile X syndrome

Fragile X syndrome causes several varied symptoms. The main problem lies in intellectual capacity, but it’s also accompanied by other signs. Some of its characteristic symptoms are:

Fragile X syndrome doesn’t always completely manifest. If the alteration of the FMR1 gene is mild or occurs in a woman who can compensate with her other X chromosome, then different forms can manifest. Thus, the two alternatives to the usual manifestations are:

Find out more here: The Genetic Origin of Sex: the X and Y Sex Chromosomes

Unfortunately, this syndrome has no cure. This is a genetic disorder that can’t be fixed once the embryo suffers from it. Likewise, it can’t be reversed during the growth of the affected child.

However, rehabilitation therapies can help manage the disorder. They help children correct their speech and incorporate them into the education system. Then, behavioral problems can be addressed with psychologists to improve their social relationships.

These children are ideal candidates for early childhood intervention. In addition, one could say that it’s crucial. At least until the age of three, these children should receive extra help from professionals with proven techniques.

Many associations and patients with fragile X syndrome are working hard to raise awareness of the disease and seek alternatives. You can read more about the disease and take a big first step in making the world a more friendly place: don’t discriminate against people who suffer from it.

Raising a Child with Down Syndrome
Children with Down syndrome require more support, affection, and attention from their parents. Read on to discover how to raise a child with this condition! Read more »
Link copied!
Interesting Articles
Illnesses
Characteristics of Henoch-Schönlein Purpura Disorder