The Symptoms and Treatment of Hypospadias

Hypospadias is a birth defect that can cause urination, sexual and fertility problems if it isn't corrected. Read on to learn more! 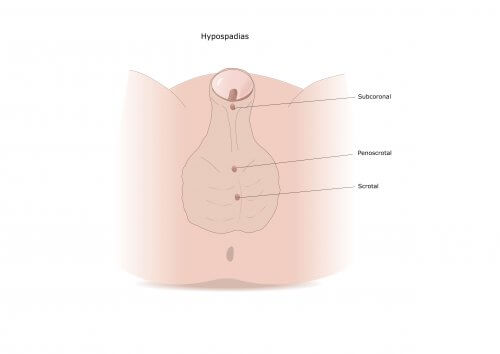 Hypospadias is a congenital defect in males in which the opening of the urethra isn’t located at the tip of the penis. The abnormal urethral opening can be located anywhere, from the area just below the tip of the penis down to the scrotum. Typically, this defect occurs between weeks 8 and 14 of pregnancy.

There are different degrees. Some are more severe than others. The type depends on the location of the opening of the urethra:

If left untreated, it can cause problems later on, such as difficulty urinating or having sex.

Although the cause of hypospadias is usually unknown, it’s believed that, in most cases, it’s caused by a combination of genes and environmental factors. Some of these factors are environmental elements that come into contact with the mother, the mother’s diet, and certain medications the mother took while pregnant.

Furthermore, the risk of hypospadias is related to aspects such as:

In most cases, the opening is located within the limits of the head of the penis. Less often, it’s located in the middle or at the base of the penis. Hypospadias symptoms may include:

Usually, most babies with hypospadias are diagnosed shortly after birth. However, if there’s a slight opening displacement, it may be more difficult to diagnose.

Treatment for hypospadias depends on the type of defect. In most cases, patients need surgery to correct it. This surgery is usually performed between the ages of three months and three years. In some cases, doctors choose to perform the surgery in stages. There are different surgical repairs, such as:

Because the doctor may need foreskin for the repair, experts don’t recommend circumcising babies with hypospadias. The surgery is typically outpatient; it’s rarely necessary for the child to spend the night at the hospital. However, surgery isn’t necessary if the defect doesn’t affect the ability to urinate standing up, sexual function, or the deposit of semen.

This article may interest you: Sex Positions that could Harm a Man

The surgeon will use a piece of foreskin or tissue from another area to create a tube to make the urethra longer. This will allow the urethra to lead to the tip of the penis. During surgery, the medical professionals will place a probe in the urethra so it maintains its new shape. The doctors usually remove this probe after two weeks. If the defect isn’t repaired, it may lead to problems such as:

Most cases have a good prognosis after surgery, as it allows the penis to work normally. In turn, surgery also improves its appearance.

Monitoring visits with the urologist are recommended after surgery. Also, it’s advisable for the child to go in for a check-up once they reach adolescence to make sure everything is fine.

What Is Paraphimosis?
Paraphimosis is a medical condition in which the foreskin of the penis is trapped behind the glans and can't return to its original position. Read more »
Link copied!
Interesting Articles
Illnesses
Hepatitis in Children: What You Need to Know