The Science-Backed Health Benefits of Citronella

Citronella oil is known for its ability to naturally repel insects. However, beyond that, it has other interesting uses. Keep reading to discover them all! 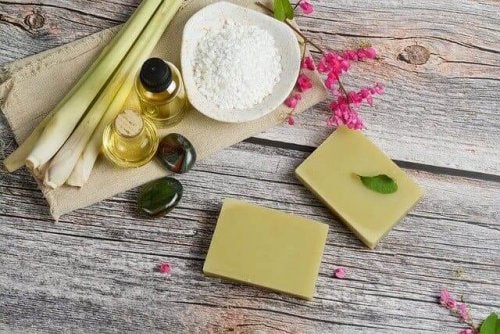 The benefits of citronella oil have been a popular research topic in the last few years. Because of this, they’ve determined that it has interesting effects against some infections and skin problems. There are even people who suggest that it can help with weight loss, gastrointestinal problems, and bruises. Do you want to find out more? Then keep reading!

To start with, it’s important to note that citronella is produced through the distillation of an Asian plant from the Cymbopogon genus. It’s also known as “lemongrass”, due to its characteristic citrus smell. The plant can grow up to a meter and a half (5 feet) tall, and it’s easily identifiable due to its striped green leaves.

Benefits of citronella oil: what does science say?

A review published in Current Drug Discover Technologies highlights the therapeutic potential of citronella oil. Specifically, they note that it contains components like citronellal, citronellol, and geraniol, which give it antioxidant, antimicrobial, and healing effects.

Currently, citronella is widely used as a natural insect repellent, since the Environmental Protection Agency (EPA) recognizes that it’s effective and non-toxic. However, beyond that, it has been used for other purposes. Let’s take a look at some uses that are backed by science.

It’s no coincidence that one of the best-known benefits of citronella oil is its use as insect repellent. Research has proven that it can help to prevent mosquito bites.

A study published in Tropical Medicine & International Health determined that citronella oil combined with vanillin, an organic compound from vanilla beans, provides protection against mosquitos for up to three hours.

In recent studies, like one published in the journal Applied Microbiology and Biotechnology, they found that citronella oil has antifungal properties. That is, it can help to weaken or eliminate some types of fungus that cause health problems, like Aspergillus niger for example.

This microorganism is a frequent cause of respiratory infections, especially in patients with a weakened immune system. In the study, citronella oil helped to destroy the cell wall of the fungus and fight the microorganisms in the cells. Because of this, researchers determined that it could work as a natural and ecological fungicide.

Right now, we still need more research to prove the effects. However, it’s important to note that in 2016, a study published in the medical journal Acta Odontologica Scandinavica, also found that it can be useful in treating fungi like Candida Albicans.

Another well-known benefit of citronella oil is healing skin injuries. Doctors even recommend it for patients with diabetic neuropathy, whose injuries tend to be difficult to heal. In a study published in Frontiers in Pharmacology they found that this essential oil has the potential to speed up healing of wounds.

The researchers specifically observed that it had interesting effects on healing wounds infected with Candida in diabetic mice. In general, they concluded that it has antifungal and anti-inflammatory effects.

Read also: 5 Healthy and Balanced Breakfast Options To Help You With Weight Loss

Other benefits of citronella oil

Citronella oil is also used in aromatherapy for therapeutic reasons. However, many of these applications aren’t backed by research. In any case, anecdotal evidence suggests that you can use it as a complement to treatments for certain problems, including:

Its use varies depending on the benefits you want to get out of it. As a repellent we recommend combining between 10 and 15 drops per ounce of water. You can also put it in a diffuser to spread its scent around your rooms.

Likewise, you can combine 15 drops with an ounce of body cream or carrier oil (coconut, olive, or jojoba oil) to massage into your skin. Are you ready to try it?

How to Make Scented Candles that Repel Bugs
Homemade aromatic candles might be able to keep bugs away and give your house a distinct decorative touch at the same time. Read more »
Link copied!
Interesting Articles
Naturopathy
What Is Colloidal Oatmeal and What Are Its Benefits?