The Properties and Benefits of Camel Milk

The characteristics of camel milk make it a great supplement in a human diet, especially under certain conditions. In today's article, we'll tell you more about its properties and health benefits. 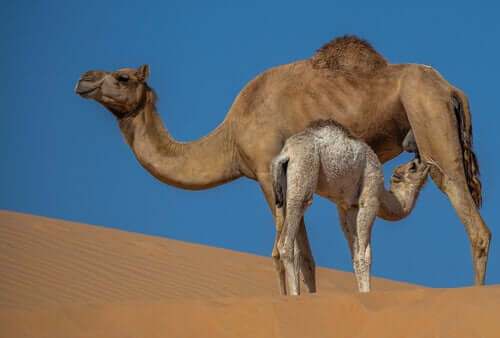 Have you ever heard of camel milk? It’s quite popular in some regions of the world. In fact, it’s often the only dairy food option in those places.

Milk is widely used all over the planet. Even though, traditionally, the most common one is cow’s milk, there’s a huge variety of species that produce it. Humans obtain it from camels, sheep, and buffaloes, among others.

A cow (a she-camel in this context) can generate from 2 to 25 pints of milk per day, depending on the quality of her food and the amount of water she ingests. A distinctive feature of this species is that it can maintain a constant rate of production that, in situations of low food availability.

Just like the milk from any other animal, camel milk contains many nutrients that can greatly benefit the human body. OK so, what’s its chemical composition? How’s it different from bovine milk? Continue reading to find out.

Except for sodium, these are basically the same as those found in bovine milk, and in similar amounts. The content of minerals varies in concentration up to 5% in situations of water restriction.

One glass (8 fluid ounces) of camel milk supplies 150 calories; contains the same amount of calcium as seven sardines with bones, and as much potassium as a banana. Its vitamins are the same as those found in bovine milk but in different proportions. Furthermore, it provides less riboflavin, folic acid, and pantothenic acid, while providing up to five times more niacin and vitamin C.

According to the World Food and Agriculture Organization (FAO), this milk is a vital source of vitamin C for people living in arid and semi-arid areas. This is good because these populations often don’t have access to fruit and vegetables.

Also read Whole Milk vs Low-Fat Milk: Which One is Better?

The protein in camel milk is similar to that contained in bovine milk. Its concentration varies from 0.12 to 0.15 ounces per 3.4 fluid ounces. Also, a glass of camel milk contains as much protein as an egg.

Regarding fats, camel milk has a content of 0.06 to 0.07 ounces per 3.4 fluid ounces, which consists of unsaturated fatty acids. There’s less cholesterol in 8 fluid ounces of this milk than in 3.5 ounces of fish, and less fat than in 8.8 ounces of beef.

The lactose content of camel milk varies depending on the animal’s water intake. Its content decreases by up to 5%, making the milk taste less sweet when they have restricted supply.

What are the health benefits of camel milk?

Researchers have identified that camel milk can help in the recovery processes from food allergies, as it contributes to the improvement of the intestinal mucosa. Also, the health benefits are greater with the consumption of camel yogurt (chal or shubat).

Similarly, it doesn’t cause lactose intolerance, despite having almost the same amount of this substance as bovine milk. Studies show that people who are lactose-intolerant can drink camel milk without having any adverse symptoms. There’s no explanation for this yet, though.

Camel milk has also been related to improvement in cases of infectious diseases such as tuberculosis. This is the consequence of the immunoglobulins in camelids having a high antigenic affinity. It gives them higher immune protection.

Finally, the ingestion of camel milk contributes to maintaining optimal levels of bone calcium, an effect that usually comes with the lactose content. This represents a bone-strengthening option for women at high risk for osteoporosis.

What are the most important properties and health benefits of camel milk?

This kind of milk isn’t easy to find, but try it if you ever have a chance. It’s always good to expand your palate. Especially when its benefits for the human body are proven.