The Most-Used Drugs that Affect Driving

Some drugs affect attention, concentration, and sleep. When you consume them, you shouldn’t drive or operate heavy machinery. 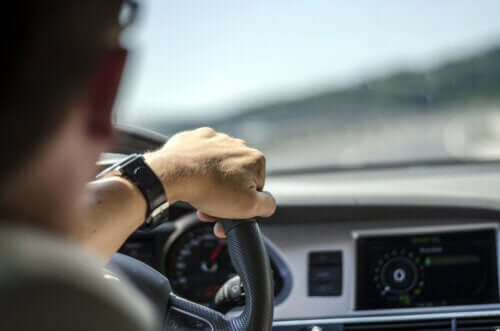 Did you know that several commonly taken drugs affect driving?

In fact, many common medications have several side effects people aren’t aware of that can be dangerous. Some of these effects are nausea, vomiting, or abdominal pain. Also, they can induce sleep, a condition that seriously affects driving or operating heavy machinery.

All commercially available drugs can trigger side effects. However, the side effects vary in severity and frequency. Side effects are the undesirable and unintended events that a patient can expect when they start treatment with a drug. In this article, we’ll talk about some common drugs that affect driving due to their side effects.

Benzodiazepines are drugs that act on the central nervous system. They’re capable of producing sedative, anticonvulsant, and hypnotic effects. For this reason, they’re widely used to treat anxiety, insomnia, and other diseases, such as epilepsy or alcohol withdrawal.

They’re the most prescribed psychotropic drugs, especially by primary care physicians. Overall, 15% of patients who take anxiolytics and 1.6% of all adults between the ages of 18 and 79 of the general population that have been prescribed benzodiazepines for a few days or weeks gradually pass to a chronic and virtually indefinite use of the drug.

Patients who have taken more than the indicated dose may suffer sedation, loss of coordination of movements, and respiratory depression, especially if taken with alcohol consumption. Also, they can produce a decrease in attention, concentration, and motor function, even at therapeutic doses. These side effects severely affect driving.

Moreover, benzodiazepines can induce depression, which is more common in patients who have already suffered from this affective disorder.

After a patient takes these drugs, they can suffer from withdrawal syndrome if they abruptly discontinue them. In turn, this may lead to anxiety, irritability, tremors, and hallucinations, among other symptoms. Some patients who have been prescribed long-term treatment with benzodiazepines at lower doses may suffer from anxiety and insomnia when they discontinue the medication. This may be due to the lack of medication or the recurrence of the originally-treated symptoms.

2. First-generation or classic antihistamines, one of the drugs that affect driving

Unlike other antihistamines, first-generation antihistamines can cross the blood-brain barrier. Due to this fact, they can produce central side effects, such as:

Due to all the side effects these drugs can cause, experts strongly advise against taking them when you need to drive.

However, the effect is different if the patient takes second-generation antihistamines, such as ebastine, loratadine, or cetirizine. Nevertheless, they can also trigger a series of side effects on the central nervous system to some extent, meaning that they could also affect the ability to drive, but to a lesser extent.

You should also read: Relieve Allergies with 7 Natural Antihistamines

If you’re taking antidepressants, you should also avoid driving. Just like in the previous cases, they may cause drowsiness. Plus, according to studies conducted on patients suffering from depression and insomnia, the use of these drugs improves sleeping problems. This means that they may make it easier for you to fall asleep.

It’s increasingly common for doctors to prescribe an antidepressant with sleep-promoting effects at low doses to treat insomnia due to the positive results obtained, even if the patient doesn’t suffer from depression. Medical professionals should warn patients of the possible side effects and precautions of the use of any drug.

Finally, these drugs have side effects, such as:

In addition to these dangerous effects on driving, epilepsy itself can alter patients’ motor and cognitive functions.

Discover: Medications that May Lead to Drowsiness

It’s important to be aware of drugs that affect driving

It’s essential to be informed about the drugs that affect driving due to the excessive sleepiness they may cause. Not being aware of this fact can increase the likelihood of being in a serious accident. Consult both your doctor and pharmacist if you have any questions about this issue.  Above all, never self-medicate. If you’re already taking benzodiazepines or antidepressants, seek alternatives to driving to help prevent accidents.

How to Treat Daytime Sleepiness with 5 Natural Remedies
Daytime sleepiness is a common problem among the population. Often, it stems from poor quality of sleep, nutritional deficiencies and some sicknesses. Read more »
Link copied!
Interesting Articles
Medication
Glycerin Suppositories: How Do They Work?

Generally, people use glycerin suppositories to solve occasional constipation. Doctors recommend them to treat this condition because they act quickly…

Prospantus syrup is a syrup with mucolytic and expectorant action. It's made of the dry Hedera helix extract. In addition, it's used…

Crushing medication is a common practice to make taking pills easier. However, it alters the integrity of the drug and, therefore,…

Medication
Learn About the Consequences of Almagate Abuse

Almagate abuse has become a common phenomenon. Since it's an over-the-counter drug in pharmacies, many patients see it as the…

Xenical is an anti-obesity drug whose active substance is orlistat. This active principle exerts its effect by reducing the absorption of the fats you consume in meals by 30%. How…

Medication
What Is Drug-induced Photosensitivity?

Drug-induced photosensitivity is quite common. In fact, researchers estimate that around 3,000 medications can cause this effect. It can appear…

There are several types of food that contain linoleic acid. You must know that this lipid has many health benefits…

Illnesses
Types of Chronic Urticaria and Its Characteristics

Chronic urticaria is a skin disease characterized by the appearance of skin lesions that manifest in various ways. There's usually…

Verbena is a wild medicinal plant considered invasive in certain ecosystems. It has many applications in popular medicine as it…

Beauty
How to Care for Scars During the Summer

During the summer, it’s important to care for scars that are exposed to the sun's rays. Although the application of…