The Main Pathogens During Summer

There are certain pathogens that manage to proliferate better during the summer, given the hot and humid conditions in the environment. So, what are the most common pathogens during summer? Read the following article to find out. 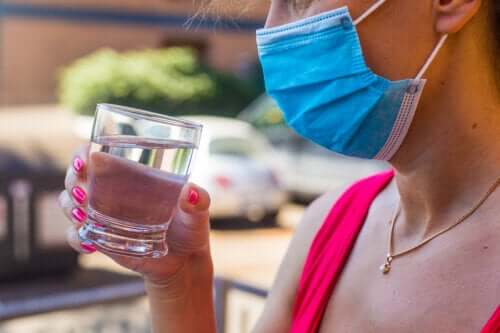 As we all know, the arrival of summer comes hand in hand with a sudden rise in temperatures in the environment. As a result, the chances of developing certain infections also increase because certain microorganisms are able to proliferate under these conditions. So, what are the main pathogens during the summer?

Exposure to viruses, bacteria, and fungi can happen at any time of year. However, given the specific characteristics of summer, some manage to spread more easily during the summer months. In the paragraphs below, we’ll tell you about those that are most frequent, as well as how to affect our health.

What is a pathogen?

The term pathogen refers to any microorganism that has the ability to cause discomfort or illness to the host that it inhabits. This definition encompasses any type of germ, including viruses, bacteria, fungi, protozoa, and other more complex microorganisms.

It’s important to note that some of the illnesses we’ll mention below have multiple origins due to their clinical symptoms. In other words, they may be caused by pathogens of different genera and even different orders. Just the same, these groupings help to simplify treatments.

What are the main pathogens of summer?

Viruses and bacteria that cause inflammation

Conjunctivitis and ear infections are inflammatory illnesses that dominate public swimming pools during the summer. Conjunctivitis has to go with the inflammation of the conjunctive layer – the mucous membrane that covers the interior of the eye. Its symptomatology includes the following:

Conjunctivitis can have either a viral or a bacterial original. However, in most cases of conjunctivitis, the adenovirus is to blame. This virus spreads through direct contact as well as through particles in contaminated water.

Ear infections, on the other hand, are usually bacterial in nature if we’re talking about infections of the outer part of the ear canal. According to the location, ear infections are classified as internal (inner ear infection) or external (outer ear infection). Their clinical manifestations include the following:

Both illnesses have something in common: The pathogens that cause them, whether viral or bacterial, live in water and warm temperatures. Therefore, warm swimming pools are the perfect breeding ground for these types of superficial inflammations.

With this in mind, practicing proper hygiene measures and bringing your own personal items is important. Remember, these microorganisms also survive on surfaces.

You may also want to read: 7 Recommendations to Fight Pink Eye Naturally

Pathogens that cause food poisoning

Who hasn’t had the misfortune of suffering intense diarrhea after a summer buffet? Food poisoning seems to be the order of the day when it comes to summer.

This occurs, first of all, because temperature increases tend to favor the multiplication of many organisms that cause food poisoning. And second, it occurs because our habits change while we’re on vacation. Eating on the seaside or by the pool, where hygiene measures are low, is much riskier than eating in your own clean kitchen.

According to MedlinePlus, some of the most common pathogens during summer that cause this clinical condition are the following:

As you can see, almost all summertime cases of diarrhea are bacterial in nature. That’s because it’s easier for an animal’s microbiota to mix with its meat when it’s not handled properly. At the same time, it’s common for the water that’s used for cooking and for cleaning utensils to be contaminated.

Other common pathogens during summer

The above-mentioned pathogens take the prize when it comes to their prevalence during the summer months. However, we can’t conclude this article without commenting on several other pathogens that are common during this season.

As you can see, the list of pathogens that cause illness during the summer is practically infinite. Bacteria are in the lead since they cause both inflammatory illnesses as well as cases of gastroenteritis and diarrhea.

Therefore, it’s important to practice extreme precaution when choosing where to eat, shower, bathe, and go to the bathroom when you’re on vacation. What’s more, if you develop any symptoms of infection, be sure to see a doctor.

Do We Need to Disinfect Food to Prevent Infection?
Bicarbonate, vinegar, hydrogen peroxide, lemon... There's currently a lot of talk of different products which can disinfect food during this pandemic. Read more »
Link copied!
Interesting Articles
Illnesses
What Is Multiple Myeloma?