Numerous studies in animals and in humans reveal that conjugated linoleic acids can help reduce body fat. Learn more in this article! 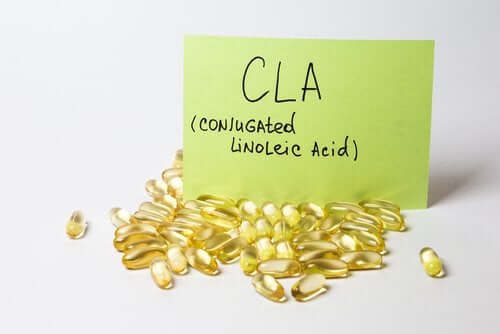 Conjugated linoleic acids are slightly modified essential fatty acids. This characteristic offers a series of health benefits to the body, especially when it comes to the regulation of appetite.

Despite this, there are many claims about nutritional properties that aren’t yet fully demonstrated. So, adequate assessment of their safety towards consumers is still necessary. Otherwise, it might lead to unwanted side effects over time.

In this article, we’ll take a closer look.

The interest aroused by conjugated linoleic acids in recent years is due to their health properties. Overall, they can improve cardiovascular problems and are also anti-carcinogens. Other health properties attributed to this compound are the following:

Let’s take a closer look at the effects of conjugated linoleic acids:

In regard to their effect on diabetes, various studies done in non-human animals proved that conjugated linoleic acid exerts an activity similar to certain drugs that act against this disease. Also, clinical trials in patients with type 2 diabetes who took conjugated linoleic acid revealed that this substance leads to a significant decrease in fasting glucose, leptin, body mass index, and weight.

There are currently many studies going on in animals and in humans that demonstrate that conjugated linoleic acid reduces body fat.

This weight reduction opens up the possible commercial exploitation of this fatty acid as a useful product in the prevention and treatment of obesity. However, its effect in humans presents a series of controversies. This is because no significant changes in body fat happened when administered to people with no weight problems.

The action of conjugated linoleic acid on the amount of body fat seems to be explained by a modification of the energy balance. It’s possible that these acids decrease food intake, increase energy consumption, and can even produce both phenomena at the same time.

This is one of the most recently discovered health benefits. However, there are still not enough studies to support it. However, researchers did observe that this substance increases certain immunoglobulins. These are the cells that recognize foreign substances or antigens. Thus, these results allowed us to glimpse the usefulness of this fatty acid in the prevention and treatment of certain food allergies.

This property might be the most-studied by researchers. They’re not only conducting experimental studies in animals, but also humans.  The results obtained concerning the prevention of breast cancer are superior when comparing conjugated linoleic acid with other similar compounds. This means that it may be effective in helping prevent breast cancer.

Overall, the antioxidant effect, the increase in the immune response, the inhibition of angiogenesis and metastasis, together with the increase in apoptosis (cell death), could be the mechanisms of this anticarcinogenic effect.

Finally, there are also studies that show the possible role of this substance in the prevention of sarcopenia and osteoporosis.

Conjugated linoleic acid is a substance that provides a lot of health benefits to the body. However, as we said before, many of its properties are still under scrutiny.

You must remember that you shouldn’t use conjugated linoleic acid as a substitute for any treatment established by your doctor. So, discuss it with your pharmacist or doctor before beginning any kind of treatment. This is because improper use could lead to serious consequences.

Five Plant Sources of Omega-3 Fatty Acids
The plant sources of omega-3 fatty acis we'll talk about in this article benefit the body in many ways. Read on to learn all about them! Read more »
Link copied!
Interesting Articles
Nutrition
Nutritional Information and Health Benefits of Peas