The Glycemic Index - Description and Uses

The glycemic index is a system created to determine how much impact food has on blood glucose in humans. It became a very important measure for diabetic people. We'll tell you what it is in today's article. 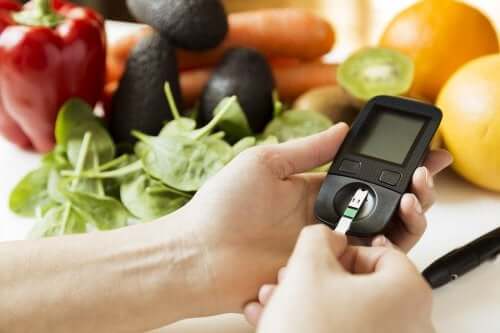 The glycemic index is a method created specifically to classify foods according to the impact they have on blood glucose. That is an attempt to measure how a particular food affects the sugar levels present in a person’s blood system.

Once a human being ingests food and it goes through their intestine, blood sugar values ​​vary. This variation depends on the nutritional values of the food they eat. For instance, the blood glucose of a person who ingested candies won’t be the same as a person who ate noodles.

The glycemic index tries to reflect, then, the capacity that food has to increase blood sugar. It’s not just a number in itself but a mathematical formula created for that purpose.

According to this system there are basically two types of food:

The formula was created in 1981 and the complete tables in 1995. These have more than 500 types of food classified according to their glycemic index. Also, there’s the international table since 2002, proposed by the researcher Foster and his team. It’s currently the most accepted one.

Factors that influence the glycemic index

You need to understand that the glycemic index isn’t equivalent to the carbs present in food. The effect it causes on blood sugar is one thing and its nutritional composition is another. (This confusion often proves counterproductive.)

The official classification happens in three groups and the value of the glycemic index of a food is given by:

1. The type of simple sugar that constitutes it

As we said above, the nutritional composition doesn’t directly equate to the effect on blood glucose. Potatoes, for example, contain a type of simple sugar that’s different from that in milk. Thus, the body will react differently and process them at different times before the intake of these types of food.

2. The presence of other nutrients

Sugars aren’t isolated in food but are there in relation to other substances, such as fats. The sugar from nuts, for example, is there together with fat and dietary fiber. So, the body takes longer to separate that sugar and process it.

Keep discovering: How to Use Bay Leaves to Treat Diabetes

3. The type of food processing

Cooked, boiled, or fried foods don’t have the same effect on blood glucose. If they’ve been kept in a refrigerator or a freezer their final effect will also be different. For instance, we know that mashed potatoes have a higher glycemic index than a fried potato.

Fruit juice also has a higher glycemic index than a whole piece of fruit. And pasta al dente has a lower index than when it’s overcooked.

Values ​​to use in the glycemic index

The glycemic index figures come from laboratory tests and formulas. For our daily use, it isn’t necessary to understand how to perform the calculations or how scientists came up with this formula.

However, we can say that it’s a proportional measure of the speed with which carbohydrates in food manifest themselves in the form of blood sugar. Thus, it’s proportional because the reference value is always the same as that of pure glucose.

Pure glucose has a value of 100, and based on this reference, we can establish the indexes for the rest of the food types and form three general groups:

Let’s emphasize again that this value doesn’t reflect the nutritional structure of a certain type of food. It doesn’t give us information about food fats, nor about the kilocalories. Mainly, it provides the specific sugar load it contains.

Keep reading: What to Eat When You Have Diabetes

How does the glycemic index influence everyday life?

As we said before, the measure we’re talking about isn’t the only one we must pay attention to. It’s a measurement that can help you chart a diabetic diet, but always in combination with other factors.

A value that helps complement this is the glycemic load, which measures the quantity and quality of carbohydrates in a portion of food. For example, a commercial cereal bar has a high glycemic index but a low glycemic load. This is because the portions are always small.

In addition, food varies when it comes to diets prepared by professionals. The glycemic index in these cases arises from the combination. For instance, you can compensate a portion of food with high value if you eat that same dish with another low index one.

Similarly, there are several meals in a day, so their individual glycemic indexes combine. We know that a meal with a low index is able to improve the glucose assimilation of the next meal, as a cumulative effect.

Of course, in the presence of metabolic diseases such as diabetes, it’s always essential to have guidance from a nutritionist when it comes to a diet. Consulting these kinds of professionals can clear up many questions about your eating habits.

How to Improve Your Diet if You Suffer from Diabetes
Do you suffer from diabetes and want to change your diet to avoid health problems? In this article, discover the best tips. Read more »
Link copied!
Interesting Articles
Illnesses
What Is Ischemic Heart Disease?