The flu vaccine has been shown to be effective in all age groups, with percentages that vary between 30% and 74%. Learn more about it. 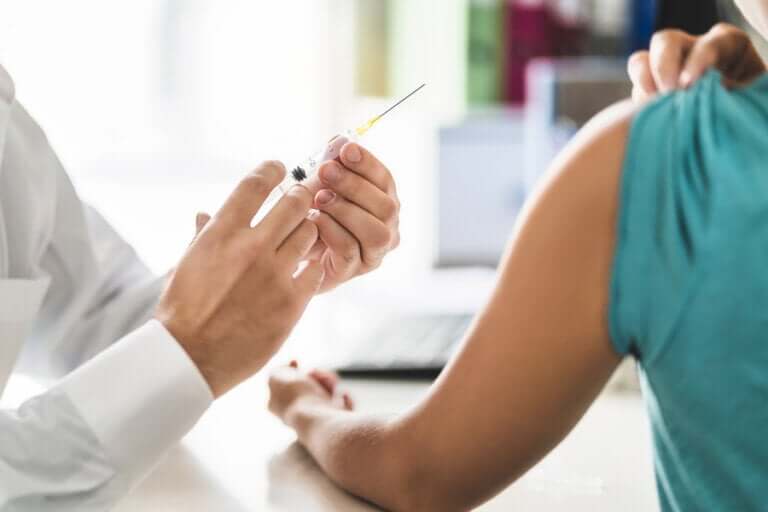 The development of the flu vaccine was a great advance in the field of medicine. This vaccine has saved thousands of lives. It helps to protect us from the effects of influenza, one of the most common illnesses today.

In fact, influenza is the most common preventable immune condition in developed countries. It’s an acute infectious disease that affects people’s respiratory tracts. This illness can affect newborns, adults or elderly people.

Flu vaccine administration is the most effective way to prevent this disease and its complications. The vaccine has proven to be effective in the entire age range of the population. Its efficacy has had percentages varying between 30% and 74% depending on the season and the strain of the vaccine.

In addition, flu vaccination reduces the number of hospitalizations due to pneumonia in people over 65 years old by about 80%. Also, it reduces mortality in adults over 75 years with chronic diseases by about 22%.

However, despite being a very common vaccine in the general population, people still have a lot of questions about it. Below, we’ll explain some of the most common questions to better understand its effectiveness and how it works.

Why do people get the flu vaccine every year?

One of the most remarkable characteristics of the influenza virus is that it can change its structure very quickly. This change is known as a mutation. Therefore, the flu vaccine has to be redesigned every year to protect the population.

The types of flu virus are called A, B and C. Influenza A is often responsible for large flu outbreaks and is constantly mutating. Type B usually triggers small outbreaks and type C causes mild illnesses.

Who needs to get a flu shot?

Certain population groups that are especially at risk need to get the influenza vaccine every year. In addition, people who care for, or live with, the most at-risk group should also get the shot on a yearly basis.

The risk groups are:

Keep reading: Everything You Need to Know About the Polio Vaccine

Does the flu vaccine have side effects?

The flu vaccine is a very safe formulation, so it usually doesn’t cause any side effects. However, like all drugs on the market, it’s not exempt from producing some adverse reactions.

Adverse drug reactions are all the undesirable and unintentional symptoms that occur when we take medications. When it comes to this vaccine, you may get a slight fever or feel pain in the injection area. However, these symptoms are very rare.

Who shouldn’t get this vaccine?

Just as there are a number of groups that should get this vaccine, there are also others who shouldn’t. In addition, there are some people who should speak to their doctor about whether or not they should get vaccinated. The doctor will help them assess the risk-benefit. Here are the populations we’re talking about:

In addition, anyone who has had a moderate or severe reaction to the vaccine before shouldn’t get this shot. Also, this study shows that those who have ever suffered paralysis due to Guillain-Barre syndrome should not get it either.

Also read: The Main Differences between a Cold and the Flu

The flu vaccine has really benefited people’s health. Ask your doctor if you should get vaccinated annually, or if you’re in a risk group who shouldn’t receive it.

World Meningitis Day: A Disease that Has a Vaccine
World Meningitis Day is celebrated every April 24 to shed some light on this disease. The good news is that there’s a vaccine to prevent bacterial cases. Read more »
Link copied!
Interesting Articles
Medication
Trastuzumab: Therapy Against HER2 Positive Breast Cancer