The First Symptoms of Perimenopause

The first symptoms of perimenopause are a series of sudden changes in a woman's body. Therefore, you must be aware of them and see a gynecologist, if necessary. Continue reading to find out more about it. 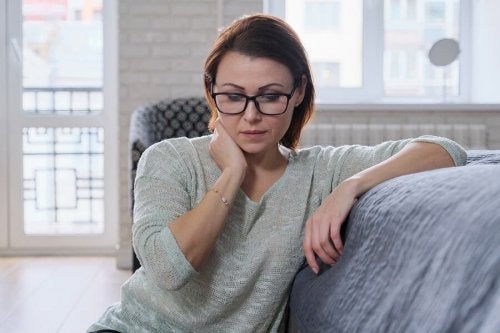 Firstly, you must know there’s a difference between menopause and female climacteric (perimenopause) — some women confuse them. They’re definitely related but different. Continue reading to find out more about it.

Menopause is the definitive disappearance of menstruation after a period of approximately twelve months. It’s the result of the shutdown of the ovarian function. It’s early menopause if it happens before the age of 40.

In contrast, climacteric is the period of transition from reproductive to non-reproductive life, at least according to medical research. This literature also highlights other guidelines with which to differentiate them:

Definitions of premature menopause often confuse some women as well. This is probably because the medical community doesn’t seem to agree on a specific term. Some studies use “premature menopause” and “ovarian insufficiency” interchangeably and define it as:

“The cessation of ovulation and endocrine ovarian functions in women younger than 40 years”.

Note that the term “ovarian insufficiency” was coined in 1942 by Fuller Albright — considered the father of endocrinology. It was the first time anyone mentioned this phenomenon. Other scientific journals also mention various terms to refer to ovarian shutdown.

According to Muntané, a health researcher, we can say that “premenopause” is:

“The period of life before menopause, in which women undergo biological changes that can lead to a series of disorders. The absence of menstruation is one of the external manifestations of these metabolic changes. Internally, it’s the end of ovulation.”

Even though the terms aren’t too precise, it’s still possible to recognize some signs to determine whether a person is facing premenopause or not.

It may interest you: Seven Factors That May Cause Early Menopause

One can’t say there’s menopause unless a woman’s period is absent for 12 continuous months, at least. However, you’re probably experiencing premenopause if you notice some of the symptoms listed below. We recommend you consult a doctor if so.

Find out: Early Menopause Increases the Risk of Dementia

How to deal with the first symptoms of perimenopause?

Being in the premenopausal period can be difficult to assimilate. However, this is a natural process and you shouldn’t be afraid of it. This is because you’re merely entering a new stage in which there’s less pressure. There are other health-related risks worth taking care of after the age of 40 such as:

Consult a doctor when you experience the first symptoms of perimenopause as they can do a balanced analysis of your family history and determine the best treatment for you. They can also alleviate any discomfort. Perhaps all you need is a new personalized diet.

In any case, if you smoke then try to quit, and adopt healthy habits. Also, take vitamin D and calcium supplements and spend at least a few minutes a day on the physical activity of your choice.

5 Natural Products to Manage Menopause
Before consuming these remedies in order to manage menopause, it is advisable that you consult your gynecologist, especially if you are following some other treatment. Read more »
Link copied!
Interesting Articles
Anatomy and physiology
Characteristics, Types, and Function of Lipids

Baby acne is acne that occurs on the skin of a newborn baby. It can occur elsewhere on the face,…

Illnesses
Everything You Need to Know About Pulmonary Thromboembolism

Pulmonary thromboembolism or pulmonary embolism is a potentially fatal disease. It occurs when parts of a thrombus break loose from…

Illnesses
The Complications of Roseola and How to Prevent It

Roseola is a viral disease that mostly affects young children between the ages of six months and two years. It’s…

When we talk about the benefits of melatonin, it's usually related to sleep and the regulation of the sleep-wake cycle. However, recently its diverse uses in other areas have been…