The Effects of Alcohol on the Nervous System

The effects of alcohol can range from aggressive and violent behavior to complex diseases of the nervous system. Discover more. 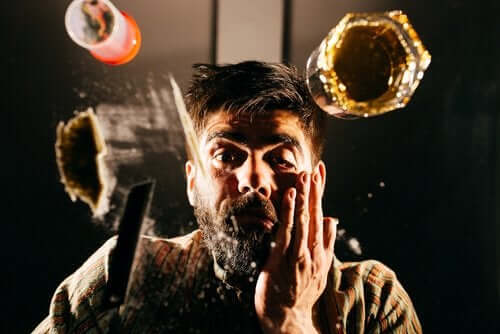 Alcohol is a drug that’s legal and socially accepted. In fact, it’s the most widespread drug in the world, and we consume it frequently at meetings, gatherings with friends, family meals, etc. However, are we fully aware of the effects of alcohol?

The effects of alcohol begin with a feeling of excitement and euphoria–a rush–that makes us feel better when we start drinking. Unfortunately, many people use it to uninhibit themselves or to relax.

However, the real effects on our bodies are not good at all. Alcohol is a toxin that can cause alterations in all of our body’s systems. In fact, there are many diseases that we can trace back to the chronic intake of this substance.

For example, alcohol is strongly associated with liver dysfunction, a reality that most people are aware of. However, few people know the effects of alcohol on our nervous system, for example.

In this article, we’ll explain them to you.

What are the effects of alcohol?


The effects of alcohol on the nervous system can be both acute and chronic. The amount a person ingests and the time that they maintain this situation are determining factors. In general, we make a distinction between acute intoxication and chronic alcoholism.

Acute intoxication occurs when a person ingests very large amounts of alcohol in a short period of time. At first, this intoxication produces pleasant symptoms, such as the disinhibition we mentioned earlier.

At the same time, we need to mention that, although many people use alcohol to socialize, it can affect others in just the opposite way. In other words, many people become aggressive and irritable when they drink.

Either way, the effects of alcohol in this case can cause an ethylic coma. This is a state of unconsciousness due to this substance that can be life-threatening.

Among the effects of alcohol, it’s also worth mentioning that it’s a depressant of our respiratory system. This means that, in these cases, death can occur due to respiratory failure.

You might also want to read: 10 Immediate Effects of Alcohol on Your Health

Alcoholism occurs when a person feels a compelling need to drink alcohol that leads them to do so constantly. One of the effects of alcohol is that it’s capable of producing physical dependence. This causes alcoholics to suffer withdrawal symptoms when they can’t drink.

Alcoholism is associated with other processes that, together, cause certain serious neurological disorders to develop:

For all these reasons, the effects of alcohol on the nervous system result in numerous diseases. Below, we’ll explain the most significant ones.

You may be interested in: 6 Signs of Alcohol Addiction You Shouldn’t Ignore

Almost 10 % of chronic alcoholics suffer from dementia. This means that these people suffer a deterioration of all their cognitive functions, such as memory and social skills. In these cases, the person loses the ability to perform complex activities. What’s more, it can also lead to changes in personality and mood.

The cerebellum is a part of our nervous system that deals with muscle coordination and other movements we make involuntarily. An estimated 50% of alcoholics suffer damage to the cerebellum. As a result, they end up having difficulty speaking, walking, and even begin to shake.

Another effect of alcohol is alcoholic polyneuropathy. It’s a disease in which some nerves degenerate and can’t properly maintain their functions. It’s associated with a lack of vitamins that’s secondary to the intake of alcohol.

These people begin to lose strength in their extremities gradually. Also, they feel paresthesias (a tickling sensation in the skin) and pain in those same extremities. Eventually, it affects the way they walk.

This pathology produces an alteration of consciousness that can go as far as a coma. It occurs because the brain doesn’t metabolize glucose correctly and certain toxic substances accumulate in it.

The effects of alcohol on the nervous system are varied and complex. It’s important to know that it produces damage both when limited to acute intoxication and when the person is chronically alcoholic.

Therefore, if you think you have an addiction to alcohol or drink often, try to stay away from it. Both your doctor and the many support groups that exist today will be able to help you.

My Partner Is an Alcoholic: How Can I Help Them?
...need the help of the people around them, all their support, empathy, understanding and patience. If your partner is an alcoholic, how can you help them? Read more »
Link copied!
Interesting Articles
Healthy habits
Vape Pens: Everything You Need to Know