The Effects of Alcohol on the Heart

The effects of alcohol on the heart can be positive, as long as it is consumed in a controlled manner and without overindulging. However, if it is consumed in high quantities it can be very harmful, and can even lead, under certain circumstances, to death. 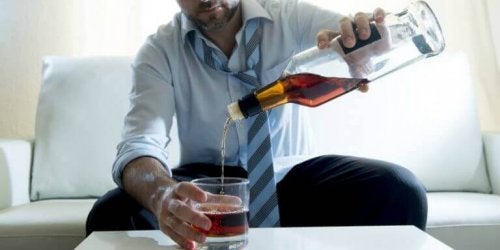 Currently, there’s some confusion surrounding the effects of alcohol on the heart. Some information suggests that drinking wine or beer, in moderate amounts, actually contributes to cardiovascular health. Having said this, there are studies that discuss the harmful effects of these drinks on the heart.

In fact, both of these arguments are correct. The effects of alcohol on the heart are varied and depend on the individual health of each person, the quantity and frequency of ingestion, as well as the type of alcohol consumed.

Either way, there’s something no one can argue with: the effects of alcohol on the heart and other organs are very serious, and even devastating, when consumed in large volumes. Likewise, it’s a psychoactive drug that can cause dependence. It can also significantly deteriorate quality of life.

Myths and truth about the effects of alcohol on the heart

There’s evidence that the effects of alcohol on the heart can be positive. Wine, for example, has a high antioxidant content (flavonoids, tannins, anthocyanins and resveratrol). These substances can help to prevent the formation of plaque in the arteries (atherosclerosis). Furthermore, they enhance the production of “good cholesterol.”

It has been said that drinking a glass of wine a day could induce these positive effects. However, a study published in the Journal of the American College of Cardiology notes that while these positive effects are real, it’s also the case that alcohol consumption, even moderately, increases the risk of irregular heartbeats.

Another study, undertaken by Professor Peter Kistler, of the Baker Heart and Diabetes Institute and Alfred Hospital in Melbourne (Australia), supports this. It indicates that while moderate alcohol consumption can help keep “the pipes” of the body clear, it can also affect the electrical parts of the heart, in particular, the rhythm of the heartbeat.

Don’t forget to read: How to Know if You’re Addicted to Alcoholic Beverages

Drinking moderately and drinking too much

There’s lots of talk about the importance of drinking alcohol moderately, and yet it’s not exactly clear what is moderate and what is excessive. The first thing that should be taken into account is the individual health of each person. A diabetic, or hypertensive person, for example, should avoid alcohol, even in moderate amounts.

On the other hand, the frequency of consumption is also important. It’s much more harmful to drink alcohol in large quantities, even if this is only done on rare occasions. Drinking more than five glasses of alcohol, for men, or four, in the case of women, increases the risk of stroke and sudden death.

In the Dietary Guidelines of the US Department of Health it is pointed out that moderate consumption is maximum one drink per day for women and two for men. However, many experts state that it’s best not to drink daily, and to avoid alcohol for at least two or three days a week.

One of the risks of alcohol consumption, even in moderate amounts, is that it can contribute to irregular heartbeats, as we have already noted. Alcohol can damage cells and cause fibrous tissue to form in the heart, as such altering the beat.

Furthermore, alcohol can change the way the heart cells contract and, over time, lead to irregular heartbeats. In the same way, it affects the autonomic nervous system, which controls, among other aspects, the rhythm of the beats.

Discover: Do You Have to Give Up Alcohol to Lose Weight?

For some people, excessive alcohol consumption can weaken the heart muscle and cause a disease called dilated cardiomyopathy. If this happens, the heart dilates and decreases its pumping force, which causes symptoms of heart failure.

Alcohol also contributes to obesity and this increases the risk of heart problems. Also, frequent and excessive alcohol consumption doubles the chances of suffering from hypertension. The combination of alcohol and psychoactive drugs can be deadly.

How to Know if You’re Addicted to Alcoholic Beverages
Drinking alcoholic beverages has been popular for centuries, and addiction to them isn't something rare. Over time, these drinks have become more popular. Read more »
Link copied!
Interesting Articles
Illnesses
Cancer During Pregnancy: What You Need to Know