The Difficulties of Obesity During Pregnancy

Obesity during pregnancy can cause health problems later on in the baby's life, as well as increasing the risk of complications during the gestation period. Read about the harmful effects of obesity and how to avoid it. 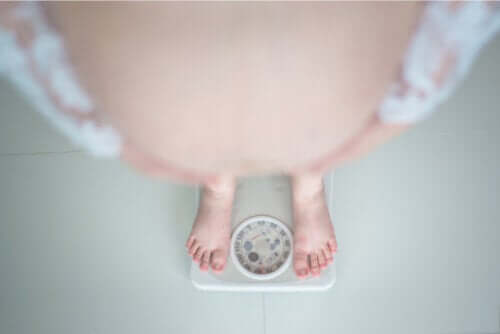 Obesity is a common condition, both during pregnancy and within the general public. According to the World Health Organization (WHO), it’s a problem that affects over 300 million people in the world.

As such, many of those affected are women that begin their pregnancies at a heavier weight than desired. Obesity during pregnancy impacts not only the mother’s health but can also cause complications for the baby and its development. For this reason, we explain everything that you need to know in this article.

What is considered obesity during pregnancy?

Obesity during pregnancy, as in any moment of a person’s life, is defined as an excess of body fat. Generally speaking, in order to classify being overweight and obese, we calculate the person’s body mass index (BMI).

The body mass index is calculated by dividing the person’s weight by their height squared. With this in mind, when the BMI is higher than 30, we consider them to be obese. There are different categories:

It’s important to know that this framework is, in reality, an approximate measure. In some cases, like for those that have a lot of muscle mass, the BMI can be high, although it isn’t due to an excess of fat. For this reason, you should only use it as a basic guideline.

The main problem is that obesity has a huge impact on every aspect of our health. It increases the risk of cardiovascular diseases, and also can harm fertility.

According to a study published in the Peruvian Journal of Gynecology and Obstetrics, this condition produces hormonal changes that end up reducing female fertility. In fact, it doesn’t only alter their ability to conceive naturally, but it also can lead to reducing the success of techniques like in vitro fertilization.

How can obesity affect pregnancy?

Obesity during pregnancy is a risk factor for both the mother and the fetus. By this, we’re referring to the gestation period; it’s clear that this condition notably increases the possibility of suffering complications.

First of all, as explained in a publication by the Mayo Clinic, it increases the risk of miscarriages. This is where the baby dies in the uterus during the first 20 weeks of the pregnancy. In a similar vein, obesity is also linked to recurring miscarriages and producing a stillborn baby.

When it comes to giving birth, those suffering from obesity during pregnancy tend to have the baby via cesarean section. This, in turn, makes the postpartum healing process slower and can lead to infections of the wound.

Preeclampsia is one of the most serious complications to occur during the gestation period and it has a strong association with obesity. It increases the mother’s blood pressure and can damage the placenta, compromising the blood flow to the fetus.

You may also be interested in: Thyroid During Pregnancy: What’s the Big Deal?

Health risks for the mother

For a pregnant woman, obesity during pregnancy poses a very serious health risk. According to the DORICA study, obesity increases the possibility of suffering a cardiovascular complication. For example, specialists link it to atherosclerosis and coronary disease.

Similarly, it increases blood pressure and the risk of suffering gestational diabetes. This disorder means that the mother’s blood sugar levels increase during pregnancy. It can cause the fetus to grow more than normal (a condition called macrosomia) and lead to hypoglycemic problems at birth.

Discover more: Epilepsy and Pregnancy: Everything You Should Know

Risks of obesity during pregnancy to the baby

Obesity during pregnancy, as we have shown above, can cause the baby to be bigger than normal. This not only complicates the birth but it also means that the baby will be more likely to suffer childhood obesity and diabetes throughout its life.

An investigation conducted by the National Institute of Child Health found that obesity during pregnancy can lead to neural tube defects in the baby. The neural tube is the structure that forms the brain and spinal column. Moreover, specialists also associate this condition with cardiac changes and injuries during birth.

How much weight is healthy to put on during pregnancy?

It’s clear that, during pregnancy, a person’s weight usually increases, as it should. Medical professionals estimate how much a person is likely to put on within healthy limits depending on the mother’s original situation. That’s to say that before the pregnancy, according to the mother’s BMI, the doctor will recommend how many pounds will be healthy to put on.

In the case of those that are already obese and are pregnant with just one baby, doctors usually suggest a maximum of around 20 pounds. If the pregnancy is with multiple babies, that can increase to between 24 and 42 pounds.

This is because suggesting that they lose weight at this stage can cause the mother anxiety, lead to premature birth, or mean that the baby is a lot smaller than it should be at birth. Nevertheless, every case must be reviewed in a specific way by a medical professional.

Advice for a healthy pregnancy

In order to have a healthy pregnancy, it’s best to plan ahead. This way you can adopt special lifestyle habits. For example, you can try to lose weight to reduce the risk of obesity during pregnancy.

It’s ideal to maintain a healthy and balanced diet. You should reduce your consumption of processed or highly fatty foods, as well as avoiding alcohol and other drugs. Furthermore, specialists recommend that you include foods rich in folic acid and iron in your diet.

Likewise, it’s important to try and exercise moderately. If you develop a good exercise routine before you become pregnant, you can continue doing it throughout the pregnancy, which will provide you and your baby with numerous benefits. Swimming or walking are great examples.

If you suffer from obesity during pregnancy or you’re thinking of getting pregnant, it’s important you speak with a medical professional. They’ll give you a series of specific recommendations that benefit your situation and help you have a healthy pregnancy.

Strategies for Managing Stress During Pregnancy
How can you manage stress during pregnancy? Without a doubt, pregnancy is one of the most wonderful stages a woman experiences in her life. Read more »
Link copied!
Interesting Articles
Pregnancy
Is it Risky to Tan During Pregnancy?