The Different Types of Chemotherapy

There are many different types of chemotherapy. Each of them is chosen based on the cancer to be treated and the patient’s condition. In this article, we explain the most common forms of presentation and the pharmacological agents used in chemotherapy. 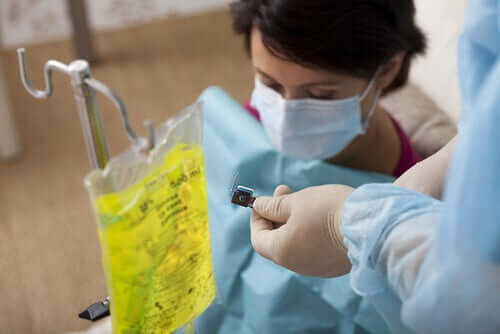 Chemotherapy, as you probably know, is one of the most commonly used treatments for cancer. It encompasses a wide variety of drugs, meaning that there are many different types of chemotherapy.

The goal of this treatment is to destroy cancer cells in order to cure the disease. However, all types of chemotherapy affect both cancer cells and healthy ones, meaning that they cause severe side effects.

Throughout this article, we’ll explain the different types of chemotherapy that exist and their main characteristics.

Alkylating agents reach their highest level of activity during the resting phase and aren’t specific to cell cycles. In turn, medical professionals can indicate different types of chemotherapy treatments:

This is a type of chemotherapy that comes from certain plants. For example, vinca alkaloids are produced from the periwinkle plant or Catharanthus rosea. This group also includes taxanes, made from the bark of the Pacific Yew tree.

All plant alkaloid chemotherapy drugs, unlike the previous group, are specific to cell cycles. This means that they attack cells depending on the phase of division they’re in. Besides vinca alkaloids and taxanes, podophyllotoxins and camptothecin analogs also belong to this group.

You should also read: Researchers Have Discovered a New Cancer Treatment that Might be Better than Chemotherapy

This is another type of chemotherapy that comes from natural substances. Instead of coming from plants, this chemotherapy comes from a species of the soil fungus Streptomyces.

Antitumor antibiotics exert their effect on cancer cells in different phases of the cell cycle, and not at a specific time, as the types we mentioned above. Here are some of the most common forms of presentation:

This is a type of chemotherapy that’s very similar to the natural molecules found in cells. Thus, when the cells incorporate these substances into cellular metabolism, they’re able to block cell division.

Antimetabolites are classified according to the substances they interfere with:

You may also want to read: Scientific Advances Develop Vaccine Against Cancerous Tumors

These are drugs that owe their effect to their ability to interfere with the action of topoisomerase enzymes (both I and II). These enzymes are responsible for manipulating DNA structure, which is necessary for replication. Two examples of these drugs are irinotecan or etoposide.

As the name of this group indicates, it includes chemotherapy drugs that don’t belong to any other group because they’re unique. Some of them are:

In addition to chemotherapy, there are many other types of chemical therapies for cancer, such as targeted therapies, immunotherapy, or hormone therapy. All these therapeutic agents have allowed great strides in the treatment of cancer.

However, we still have a very big challenge ahead and further research is needed in this therapeutic area. The ultimate goal, therefore, is to achieve highly specific types of chemotherapy that mostly attack only tumor cells.

Carcinophobia, or the Fear of Cancer
It's reasonable to have a fear of cancer as long as it isn't excessive or lead to obsessive behaviors. Keep reading to learn more. Read more »

Chlorhexidine is an antiseptic that prevents the growth of bacteria, the main producers of infection. What it does is prevent…

Medication
Madopar: What Is It Used For?

Madopar is a medication that's used in the treatment of Parkinson's disease. It's made up of two active ingredients, 200 milligrams of levodopa and 50 milligrams of benserazide. It comes…

Ciprofloxacin is a drug with antibiotic properties that belongs to the fluoroquinolone family. It's a broad-spectrum antibacterial drug. That is,…

Medication
Medication and Treatment of OCD

OCD, Obsessive Compulsive Disorder, is a common and treatable medical condition. Nowadays there's a series of medications, especially antidepressants, that…

Compromised airways and breathing is one of the leading causes of death and severe morbidity in adults and old people. Therefore, cardiopulmonary resuscitation techniques, like intubation, are one of the most important…

Medication
What Are the Types of General Anesthesia?

General anesthesia is a type of pharmaceutical drug that doctors use in an operating room to induce anesthesia. This state…

Interesting Articles
Illnesses
Hypothalamic Amenorrhea: Why Does It Happen?

Medicinal plants
Uses and Side Effects of Comfrey

Comfrey (Symphytum officinale) is a perennial plant that people have used for various medicinal purposes throughout history. It belongs to…

Ocular nevi are mainly known as eye freckles. These mole-like spots form on the inside of the eye, and their…