The Differences between Male and Female Skin

There are many differences in both types of skin and, therefore, men's and women's skincare rituals must be specific to their own types. 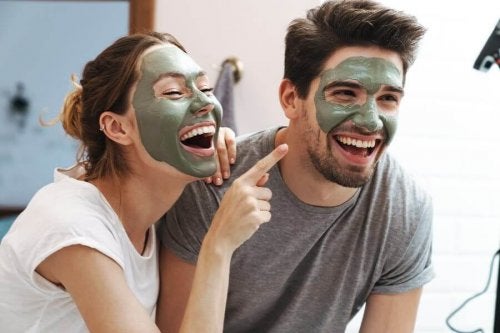 The differences between male and female skin are many. However, both sexes should use moisturizing products and sunscreen to keep them in optimal condition. It’s true there are few gender-specific products, but you must know the differences between each skin type in order to make a suitable choice.

For example, men must resort to a specific product for facial care. This is because their skin may suffer due to shaving. And, although there are similarities between men’s and women’s skin, their differences do determine the care they require to keep it in good shape.

The main differences between male and female skin

First of all, let’s make it clear that the skin is the largest organ of the human body, and made up of 3 epidermis, dermis, and hypodermis layers on a structural level. These, in turn, have skin attachments such as hair, nails, and sweat glands.

There are two great variables and testosterone is one of them. This is the hormone that governs the distinctive skin features of men in relation to women’s. It gives a different structure to men’s skin, both on their face and on the rest of their body. Their skin is greasier, thicker, and ages differently.

The second cause of this significant difference is the act of daily shaving that men’s faces are subjected to. It adds significant stress to their skin.

Other differences between male and female skin

Men’s skin is about 20% thicker than women’s. In addition, it contains more collagen and, therefore, the signs of aging take longer to appear. In women, the skin typically undergoes significant thinning after menopause, as detailed in a publication by the American Academy of Dermatology.

Another difference between men’s skin and women’s skin is the level of oiliness. Men’s dermis has more fat because it has more sebaceous glands. Therefore, sebum production is greater than in women’s skin. In addition, they have more pores and these are larger.

Men’s glands, which act by androgenic stimulation, can produce twice as much sebum as women’s, leading to the appearance of blemishes, dryness, and acne.

This increased sebaceous secretion can last well into old age in males. The sebaceous production decreases in women after menopause and the characteristic senile dry skin makes an appearance.

The appearance of facial hair is a male characteristic mainly. The beard begins to appear around the age of 15 to 16, specifically, in the area of ​​the chin and mustache. From this age on, a male will also develop hair on their chest, arms, and legs.

The appearance of cellulite is more frequent among women. In fact, estimates indicate that about 90% of women have this problem. But why doesn’t it affect men so much? This is because the structure of the subcutaneous tissue between both sexes is very different.

As a study published in Plastic and Reconstructive Surgery explains, the connective tissue in men is stronger so there’s not as much accumulation of subcutaneous fat. In contrast, the fat cells are larger in women and their connective tissue is weaker due to the activity of female hormones.

As we mentioned above, there’s a greater amount of collagen in men, consequently, their skin looks more compact and firm. This substance steadily reduces over time though. This is different in women.

It may interest you: Diagnosis of Skin Necrosis

The signs of aging (such as wrinkles) appear later on a man’s skin, but they’re more intense when they do (fully formed grooves). In women, bags and dark circles are more pronounced. The skin becomes loose due to the substantial loss of muscle mass, which gives a tired appearance to the eyes.

Things to keep in mind about male and female skin

Men’s and women’s skin is different alright. In order to properly care for it, they must use different beauty products and treatments, adapted to the needs of their gender but always keeping in mind the importance of applying moisturizers and sunscreens.

How Coronavirus Affects the Skin
Recent studies describe how coronavirus affects the skin, both directly and indirectly. We'll take a look at the symptoms and how to identify them. Read more »
Link copied!
Interesting Articles
Beauty
Can Cosmetics Irritate the Skin?