The Differences Between Karate and Taekwondo

Karate and taekwondo are two martial arts that have many things in common but are actually quite different. Today's article will tell you more about them. 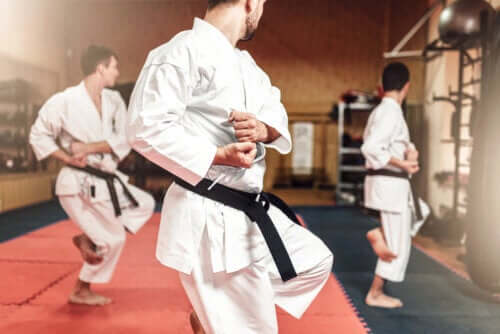 Karate and taekwondo are two commonly practiced martial arts that can be difficult to tell apart at first glance. They’re definitely similar but not the same.

Indeed, both disciplines originated in Japan, and emphasize self-discipline and a high code of personal conduct. In addition, they share the competitive side. However, taekwondo is an ancient fighting style while karate, as a discipline, only emerged a few hundred years ago. It derives from Chinese kung fu.

Note that the specific postures and movements differ significantly between taekwondo and karate despite the similarities.

Taekwondo is a Korean martial art characterized by its emphasis on overhead kicks, jumping and spinning kicks, and fast kicking techniques. It’s been around for more than 2000 years.

In its early days, this technique was an unarmed defense martial art and people knew it as Subak. Taekkyeon was the style that gave rise to it. There were three rival kingdoms in Korea that trained their men in unarmed combat at the time.

However, the Japanese banned Korean martial arts when they invaded Korea in the early 20th century, although some groups continued to practice them in secret. Moreover, the styles branched out for various reasons. Later on, at a conference held in 1955, they merged into a uniform form of teaching.

In comparison, karate arose hundreds of years ago on the Ryūkyū Islands in Japan, which we know today as Okinawa. It emerged from Chinese kung fu.

Its origin dates back to the 16th century when Japan forcibly occupied Okinawa in 1600 and confiscated all its weapons. The locals fought with their bare hands and feet, as they had nothing else.

As for its meaning, karate means “empty hand.” The term is likely related to the origin of the discipline, as a system of self-defense based on the effective use of the unarmed body.

Learn about The Japanese Method for Eliminating Stress

Karate is a martial art based on punches, kicks, knee or elbow strikes, and open hand techniques. This discipline also includes blocking techniques, such as parries and some projections (takedowns). As for the movements, these are sharp and linear.

Note that the traditional starting style in taekwondo is with the arms together, while in karate it consists of straight against the torso, hands just below the waist, and bow executed by bending the torso downward while keeping the gaze on the opponent.

Differences between karate and taekwondo in competition

The differences between karate and taekwondo are visible to the naked eye in competition. The latter requires a case and a chest protector while there’s no protection whatsoever in the former.

Furthermore, both martial arts used to be an Olympic sport but karate will no longer be present as such at the Paris 2024 Olympic Games.

Check out these Extracurricular Activities for Preteens

Commonalities of karate and taekwondo

Karate and taekwondo are different but have some similarities. The most relevant are:

The particular characteristics of these martial arts

Having analyzed this information, you can now see that the differences between karate and taekwondo are quite evident, especially on television. However, it’s probably not so easy to notice them if you see them in an action movie.

Nevertheless, it’s interesting to know about the characteristics of each of these martial arts, as well as their common points.

How Can Tai Chi Improve Your Health?
The practice of tai chi not only helps us to achieve greater balance and to avoid falls, but it also has psychological and physical benefits. Read more »
Link copied!
Interesting Articles
Exercise and sports
Options for Creating Your Own Punching Bag at Home