The Cough Associated With a Cold

Coughing helps expel secretions and foreign particles that can appear in our respiratory airways. Specifically, the cough associated with a cold can be dry, productive, or mixed. 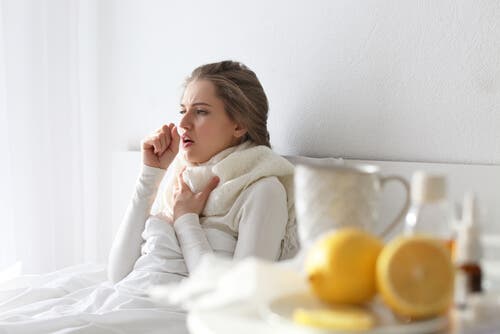 The cough associated with a cold is one of the most common symptoms in winter. However, it’s not only a symptom of illness but also one of our body’s defense mechanisms. It helps to expel secretions and foreign particles that may be present in our respiratory airways.

Coughing can have different causes, including the following:

Types of cough associated with a cold

A dry cough occurs as a result of irritating stimuli on the pharynx, larynx, and upper respiratory airways. On many occasions, coughing itself increases irritation and the need to cough, producing a vicious cycle. This can cause the throat to be even more irritated.

In these cases, treatment aims to reduce the intensity and frequency of coughing. In general, it involves locally or peripherally acting cough suppressants. It can also involve natural substances that protect the mucus membrane from irritants.

A productive or chesty cough results from the stimulation of the nerves of the lower respiratory airway, accompanied by mucus. According to the consistency of mucus, it may be more or less difficult to expel by coughing.

It’s not a good idea to suppress this type of cough, as it’s a defense mechanism for the expulsion of the agents that cause it. However, patients can take treatments that liquify the mucus, reduce its viscosity, and facilitate expulsion.

Dry coughing that evolves into a productive cough

During the initial phases of a cough, it’s common for a dry cough to appear. This is the result of an irritating and inflammatory process. However, as the process advances, inflammation of the respiratory airways leads to an increase in mucus production.

This mucus becomes dense and viscous, taking on the form of a productive cough as a defense mechanism for expelling mucus. This is the natural evolution of the cough associated with a cold and shouldn’t be cause for alarm.

Discover more: How to Cure a Dry Cough in Children

How to treat the cough associated with a cold through phytotherapy

In the field of phytotherapy, there exist vegetable species and other natural ingredients that aid against different types of cough. Some of these work on their own, while others work in combination. There are three types of effects they can have on a cough:

Among the most common components in phytotherapy for these treatments are mucilages, saponins, flavonoids, and essential oils.

Mucilages are polysaccharides that have a soothing and protective effect on the mucus membranes against irritating agents. At the same time, they can yield water to the mucus membranes and hydrate them. This favors the liquefaction of mucus, which facilitates its expulsion.

Mucilages are used in preparations for dry cough as well as productive cough. Among the plants that contain mucilages are aloe, marshmallow, poppy, mullein, plantain, and mauve.

Saponins act mainly as expectorants through two different mechanisms. On the one hand, through their reflexive action mediated by the vagus nerve, inducing bronchial secretion. At the same time, when they come into contact with mucus, saponins liquify it, aiding in its expulsion.

The main plants that are used as expectorants because of their saponin content are ivy, milkworts, primrose, and licorice. Among them, the most commonly used is ivy, although the mechanism of its action isn’t completely known.

However, according to a report by the European Medicines Agency (EMA), recent studies shed some light on the subject. They point out that the saponins of ivy leaves favor the dilation of the bronchial tubes and stimulate the secretion of phlegm.

You may also want to read: Seven Tips to Treat Nighttime Cough in Children

The essential oils that people can use to treat the cough associated with a cold have an antimicrobial effect in common. Thanks to their composition, essential oils offer a variety of therapeutic properties, including balsamic, suppressant, and expectorant properties. When people take them orally, these oils exercise their local effect on the respiratory airway.

In order to treat respiratory conditions, people can use essential oils like wild pine, ravensara, and oregano. You can take them alone or in combination. What’s more, they’re not only useful in treating illnesses, but also in preventing them.

Aside from the pharmacological treatments for the cough associated with a cold, phytotherapy can be a good option. Not only is it safe, but it’s also very effective. What’s more, many of the plant substances help to treat both dry cough and productive cough.

In fact, there are commercial products that you can find in pharmacies that consist of natural substances. Just the same, in the case of persistent coughing or mucus with a strange appearance, you should see a doctor.

Use Onions to Fight Coughs Naturally
While the properties in onions are perfect for fighting respiratory infections, you can also increase their expectorant properties with other ingredients. Fight coughs naturally with onions. Read more »