Ginger can help with digestive problems, relieve arthritis, and improve skin. Discover the uses and benefits of ginger oil today! 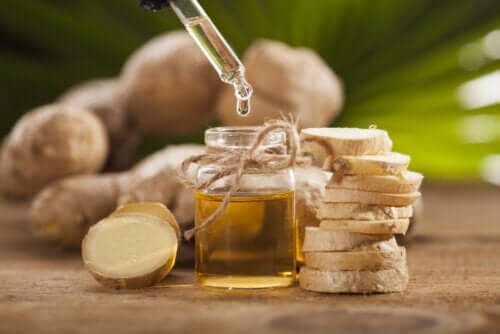 Ginger, whose scientific name is Zingiber officinale, is a plant appreciated for its medicinal and culinary uses. The most used part of the plant is the rhizome, an underground stem that grows horizontally and is used to prepare tea and season meals from cubes, powder, or grated ginger. However, today we want to talk specifically about the uses and benefits of ginger oil. We’ll even tell you how to make it yourself!

The most widespread therapeutic uses of ginger include treating digestive problems, relieving arthritis pains, and eliminating nausea caused by dizziness and pregnancy.

Here are some other ways in which ginger and ginger oil can contribute to your health.

What is ginger oil?

Ginger oil is a fatty liquid obtained by subjecting the rhizome of the plant of the same name to a distillation process. In general, it’s a concentrated oil that’s yellow in color and its aroma is strong and spicy. The uses and benefits of ginger oil are both medical and cosmetological.

What are the benefits of ginger oil?

Although many of the benefits attributed to ginger oil are anecdotal evidence, there’s also research attesting to how it can improve health. Let’s take a look at some of them.

A study published in the Journal of Oleo Science showed that ginger oil has anti-inflammatory properties, capable of preventing changes in kidney function that are associated with inflammation. Similarly, it could protect the kidneys of rodents poisoned with cadmium.

At the same time, research in rats with rheumatoid arthritis found that, although injection of ginger oil couldn’t reduce the acute inflammation of the joints, it was able to eliminate chronic inflammation.

Finally, other research that appeared in the Journal of Medicinal Food suggested that adding ginger oil extract to the diet of rodents with obesity can prevent weight gain and reduce markers of inflammation.

Now, we must consider that human research is still lacking to certify the anti-inflammatory benefits of ginger oil.

Read also: Six Anti-inflammatory Foods You Must Include in Your Diet

According to traditional medicine, inhaling the vapor from ginger oil can eliminate nausea. Let’s see what science has to say about it.

A study published in the Journal of Alternative and Complementary Medicine set out to evaluate the efficacy of this oil against post-operative nausea. In the results, participants reported lower levels of vomiting than those who consumed a placebo.

However, a study published in BMC Complementary and Alternative Medicine yielded contradictory results. This research compared the levels of postoperative nausea in children who inhaled a mixture of oils (including ginger oil) or a placebo. The results showed no difference.

According to a study published in the Journal of Cosmetic Science, ginger oil acts as a powerful antioxidant that, when combined with cream and other essential oils, can reduce skin roughness.

Research in rodents that appeared in Phytotherapy Research showed that daily topical application of ginger oil, in combination with other essential oils, can reduce the severity and inflammation of arthritis. However, more human studies are still necessary.

Other benefits of ginger oil

Other benefits of ginger oil include the following:

How to use ginger oil?

In cooking, ginger oil is used for flavoring, enriching, and adding aroma to foods. Since it should be used in small quantities due to its invasive nature, the general recommendation is to combine it with other oils (such as extra virgin olive oil).

To obtain the benefits of this oil through aromatherapy, you can use a diffuser or aerosol, as well as steam inhalations. With the diffuser, you only have to follow the instructions of the model you have. Keep in mind that there will be cases in which it will be necessary to dilute the oil in a little water.

Now, to make the steam inhalations, we recommend following these steps:

If you’re going to apply ginger oil to your skin, you should always dilute it with a carrier oil. Some oils that fulfill this function are almond oil, coconut oil, jojoba oil, and avocado oil.

Side effects and precautions

Ginger oil is considered safe with few side effects. What’s more, you should keep in mind that many of these side effects are due to ignorance, as is the case of applying the oil on the skin without diluting it. It’s always a good idea to try a small amount first.

On the other hand, high doses of this oil can generate acidity, diarrhea, and mouth irritation. Pregnant and lactating women shouldn’t consume it without consulting a doctor. Pregnant women, in particular, can’t take more than 1 gram per day.

Children over 2 years old can take it to relieve nausea, spasms, and headaches. However, consultation with a specialist is also required.

People on anticoagulant medication shouldn’t take it without professional supervision, as it increases the risk of bleeding. Something similar happens with diabetic and hypertensive patients, as a combination of medication and oil can lower blood sugar levels and blood pressure too much.

How to prepare ginger oil at home?

You can prepare it from the comfort of your home with these ingredients and instructions.

What to remember about ginger oil

Extracted from the rhizome of the plant of the same name, ginger oil is easy to recognize by its strong and spicy smell. It is often used when combined with other oils to season salads.

Similarly, benefits such as reducing inflammation, improving skin health, and relieving anxiety can be obtained through topical use and techniques such as aromatherapy.

As for its side effects, although it’s safe, you should go overboard. Children, pregnant and lactating women should consult a doctor before starting its consumption.