The 5 best remedies to cure back herpes

It's believed that ingesting certain foods and drinks that help "boost" the immune system can help relive back herpes. 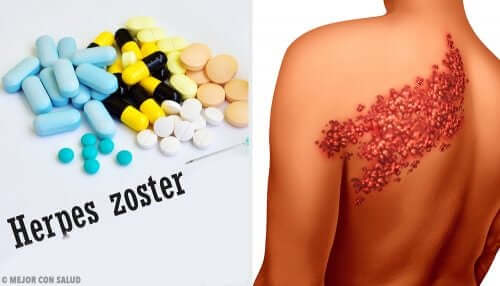 Herpes on the back is not only an aesthetic problem. This pathology can have different causes and symptoms depending on the specific virus that causes it. For this reason, it’s best to know the type of herpes that you suffer from and treat it as soon as possible.

It’s popularly considered that certain natural remedies can be used to alleviate the discomfort caused by herpes on the back. Some of them include brewer’s yeast, aloe vera, and propolis.

More about back herpes

Herpes is an infectious disease caused by a virus. It is considered a chronic pathology, since this virus remains in our body and triggers outbreaks according to different factors.

The symptoms, the affected area, and the severity also vary according to the type of virus, which can be simple or zoster.

Both back herpes and any other variant appear in our body when our immune system is weakened.

When it comes to treatment, the Spanish Society of Internal Medicine points out the following:

Natural remedies for back herpes

Below we will share more about these remedies. However, we want to clarify that these remedies should never replace pharmacological treatment or the recommendations made by your doctor.

Remember that, although often proposed, natural remedies are not always the most convenient for all cases. Additionally, you must keep in mind that, if the doctor authorized its use, then the remedy would become a complement to your treatment, within a healthy lifestyle.

According to Mayo Clinic experts, one of the home remedies that can help get relief is applying cold compresses to the blisters. They also indicate that instead of applying compresses, you could take cold baths.

Echinacea is a plant with several attributes. It’s been used topically for treating ulcers, sores, and other conditions, such as back herpes.

Although it’s not entirely proven that it has anti-inflammatory, antibacterial, antiviral, and antiseptic properties, some scientists consider it to be a remedy with potential. However, they point out that it’s important to continue investigating and staying informed.

It’s commonly said that echinacea tea could help to “strengthen” the immune system, which would contribute to the treatment of the infection.

There are those who consume echinacea tea to relieve back herpes, however, it’s not proven that this beverage can be responsible for any type of improvement.

In a study published in 2010, it was concluded that some compounds in echinacea may be helpful in treating patients who have recurrent cold sores.

Brewer’s yeast contains lysine, one of the ten essential amino acids for humans. It’s also made up of other important nutrients, such as:

Because of its lysine content, brewer’s yeast could help fight a herpes infection. For this reason, it’s recommended to add this food to one’s diet in order to benefit from all its properties and additionally, reinforce the immune system.

* It’s advisable to consult with your doctor before starting to consume brewery’s yeast in tablets or other similar forms.

Garlic has been considered a food that can be a natural antibiotic due to its allicin content. It’s capable of helping to fight infections. However, it’s been proven that the consumption of garlic, as such, isn’t capable of providing such benefits.

There are those who consume it regularly in their diet and there are those who crush it and apply it as a paste on the wounds. However, dermatologists clarify that this isn’t recommended, as it can cause irritation and can aggravate the condition.

Another food that’s come to be considered a possible natural antibiotic is propolis. However, there’s no evidence claiming that it can work in this way or contribute significantly to the treatment of back herpes or any other infection.

As it’s often attributed to having healing and anti-inflammatory properties, aloe vera is often recommended as a natural remedy for blisters caused by herpes on the back.

Again, dermatologists do not recommend resorting to aloe vera in this way, as it can backfire. If you want to resort to this (or other remedies), it would be best to consult your doctor first.

To treat back herpes properly, the best thing you can do is go to the doctor and follow their instructions. Additionally, it’s recommended that you maintain good lifestyle habits since these can add a lot to your health, and not only in case of illness.

How to Treat Herpes in Children
Herpes in children are caused by the herpes virus. A few decades ago it wasn't very common in children. However, in recent years it has gained ground. Read more »
Link copied!
Interesting Articles
Natural remedies
4 Science-Backed Spice-Based Remedies