Text neck syndrome manifests with a set of symptoms directly related to the use of smartphones. Cervical pain is the main symptom. Continue reading to find out more about it. 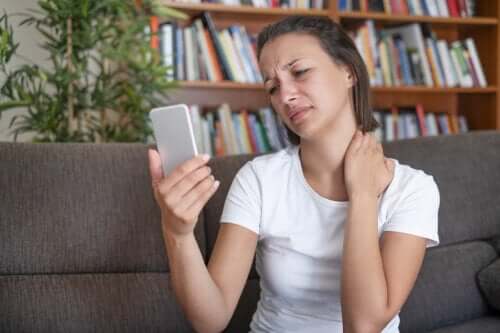 “Text neck” syndrome is also known as broken neck syndrome, among other terms. However, the former is a reference to a common cause of this neck condition: the use of cellphones. It has become more common due to the prevalence of the use of smartphones and other electronic devices.

This syndrome manifests with a series of painful neck symptoms. The pain usually begins in the cervical region and extends to the shoulders and the back. There may also be a headache. Even though the main problem here is pain, there’s been medical warnings about other disorders generated by these devices for a while. These include problems stemming from exposure to the screen lights and joint damage caused by repetitive movements.

Young people are the most affected by this condition, as this group uses mobile devices for longer periods. However, considering there are about three billion cell phone users in the world, the population that’s susceptible to this condition is huge.

Text neck syndrome is a recognized condition, even though it isn’t yet part of the international classification of diseases. You could say it’s a form of cervicalgia or vertiginous syndrome. However, in this particular case, the cervical pain is due to the position of the head.

The causes of text neck syndrome

The underlying problem here is the position of the head, which is directly related to the use of cell phones. However, what really causes the pain, in the end, is an abnormal head inclination for extended periods.

When the head is straight or in a normal neutral position, the weight it exerts on the spine is about 9-10 pounds. This is what skulls usually weigh. Thus, when you tilt your head forward, the weight that the neck must support increases. A mere shift to a forty-five-degree angle increases the weight.

So, the problem becomes a habit and worsens and the more you use your phone the greater the angle you use to write and read on it. It happens progressively, and many barely notice it.

But what about computers?

Cell phones cause a greater head tilt than computers. Researchers also discovered that there’s less lateralization of the head and a lower elevation of the shoulders when a person uses a computer.

Ergonomists (the people who study posture and how it impacts human health) use a scale to assess risk. It’s called the RULA scale, and everyday cellphone use yields a score of 6, which is a very high risk.

Read on: Five Symptoms of Aging On Your Neck and How to Reverse It

What’s the ideal position for using a smartphone?

Like any activity that involves a specific posture, there are better, healthier ways to do it. There are three main concepts for the correct position of your body while using a smartphone:

Because text neck syndrome is also linked to the continuous use of computers, the above recommendations also apply to computer use. Thus, maintain your head at zero degrees when using a computer. Elevate your monitor to eye level and take breaks at regular intervals.

Consult a health professional if you’re in pain due to text neck syndrome. They should be able to diagnose you and give you some physiotherapy sessions and a pain reliever to calm it momentarily. However, don’t be too scared of this condition, but know that you’ll be much more comfortable if you can prevent it.

Amazing Natural Remedies for Neck Pain
Neck pain is a common problem many of us face. In this article, we'll tell you about some amazing remedies for neck pain that you can do at home. Read more »
Link copied!
Interesting Articles
Illnesses
Nipple Discharge: Causes and Recommendations