Terbutaline: What’s it Used For?

Terbutaline is a widely used drug for the treatment of asthma. Like all medicines on the market, it can cause a series of side effects that you must take into account if you’re using it, since its misuse can have serious health consequences. 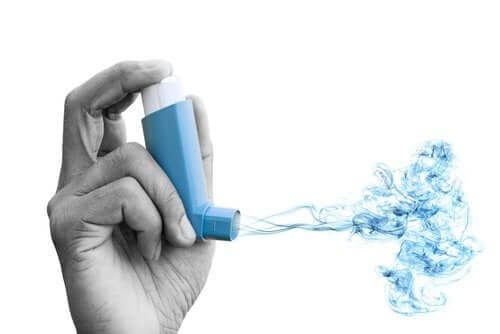 Terbutaline is a bronchodilator drug that belongs to the group of beta2-adrenergic agonists.

For this reason, terbutaline is indicated primarily in the short term treatment of asthma. However, medical professionals also use it to fight other diseases, such as those that manifest with lung obstructions, like emphysema and chronic bronchitis.

The FDA authorized the use of terbutaline in children of all ages because it exists in liquid form for aerosol administration. Curiously, though, it’s a drug that can test positive in doping tests. Also, it can cause cardiac arrhythmias, such as atrial fibrillation, supraventricular tachycardia, and extrasystoles.

However, we’ll delve deeper into its side effects throughout its article.

How asthma is triggered

It’s important to know that the main condition medical professionals indicate terbutaline for is asthma. This way, you can better understand its mechanism of action and the characteristics of the drug.

Asthma is an upper respiratory disease. It causes the bronchi to constrict and become inflamed. Because of this, the patient has difficulty breathing. It can cause wheezing, coughing, or a severe lack of oxygen.

However, the causes of this disease aren’t clearly identified. Experts agree that both environmental and genetic factors likely play a role in the development of this disease. Furthermore, exposure to several factors can worsen asthma. However, these triggers vary from one person to another, as well as the severity of symptoms.

Among the most common irritants and triggers, we can mention:

How does terbutaline work?

As we mentioned above, terbutaline is a beta2-adrenergic agonist, presenting insignificant effects on α receptors. The activation of beta 2 receptors triggers, among other actions, bronchodilation. Because the lungs contain a lot of these receptors, terbutaline produces potent bronchodilation, which is why it works for asthma episodes.

However, it’s important to note that this drug can trigger tolerance in the patient who uses it. Experts demonstrated in clinical trials that the continued use of beta-2 agonists for 12 months or more may accelerate the deterioration of the respiratory system in asthmatic patients.

Moreover, it’s also important to note that terbutaline also exerts effects on the heart, as this organ also contains many beta-2 receptors. Therefore, this drug, like all other beta-2 agonists, is cardio-stimulatory. However, terbutaline is a drug medical professionals indicate specifically to try to reverse recurrent bronchial asthma attacks and acute bronchospasm.

You should also read: Asthma Symptoms, Triggers, and Diagnosis Facts

Side effects of terbutaline

Like all drugs on the market, terbutaline can cause a series of side effects that you must take into account if you’re using it. Its misuse can lead to serious health consequences. Therefore, you should always follow your doctor’s and pharmacist’s instructions and always tell them of any discomfort you feel from the start of treatment with the drug.

As for the side effects that beta-2 agonists, such as terbutaline, usually trigger, we can mention that the most common ones are:

Moreover, bronchospasm can also occur. Paradoxically, if this occurs, the patient will need to immediately administer another bronchodilator.

Terbutaline is a widely used drug for the treatment of asthma. This is a bronchodilator drug which owes its effectiveness to its ability to stimulate beta-2 receptors in the lungs. However, since these receptors are also found in other organs, terbutaline can trigger other unwanted effects which, although expected, the patient must take into account when they start treatment with this drug.

Can You Control Asthma and its Symptoms?
Trying to understand certain diseases is an exhausting task, especially when you add the “incurable” variety to that list. This is the case of the condition we want to talk about today: asthma. Nevertheless, there are ways to control asthma and its symptoms. Read more »
Link copied!
Interesting Articles
Medication
Characteristics and Uses of Flumazenil