Teenage Lying - A Most Feared Scenario

Adolescence is complex as there are many behavioral changes going on during this stage. However, many parents are concerned with the issue of teenage lying. So, here's what should you know about it. 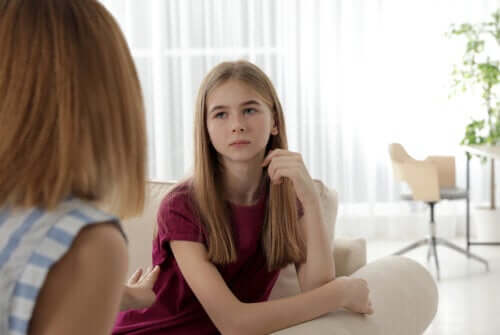 Teenage lying is one of the things that most worries parents, no doubt. There are many reasons why a person might lie. But in general, parents dread dealing with it due to the complexity of a young person going through adolescence.

Are there big lies and white lies? Or, do all have the same value, even the most insignificant and harmless ones? These and other questions are what we often ask ourselves when confronted with a scenario in which lies are possible.

Sometimes they appear to us in a veiled way and, on other occasions, teenage lies are just crouched, waiting to sneak in somehow.

So, why can’t parents talk to their children about this issue? How can they keep them from lying? Just as children aren’t born from cabbages, neither are lies natural. In fact, they mainly build a record, a trajectory.

During childhood, infants often confuse reality with fantasy and give free rein to their imagination. You could say their stories aren’t entirely true. But the motivation is innocent, and this type of game will disappear when the child grows older.

The problems begin when the child understands they can get a secondary benefit through lying.

You may be interested: Tips That Will Help You Know If Someone Is Lying

Many times lying is due to severe restrictions in regards to outings and permission granted by the parents. Or perhaps they’re merely due to feelings of guilt due to difficulties such as school grades or the “accidental” finding of a cigarette in their backpack.

Susana Molina Martin (2010) points out that:

“As in any developmental stage, adolescent behavior is determined by physical, psychological and social factors.”

Educational centers are going through a period of adaptation to the new forms of interaction that occur in a student’s relationships with their environment.

In her research, the author describes the simulation or pretense behavior during adolescence and analyzes it as a result of the child’s survival needs in their society.

Discover: How to Know if Your Teen is Lying

When to be concerned about teenage lying?

Lying – when occasional – shouldn’t worry you too much. Just make sure you can recognize some signs so that this kind of behavior will be the exception and not the rule. You must intervene when they become a habit.

Adolescence is the stage when a person searches for their identity. A search for autonomy, independence, which sets them apart from their parents. There are many occasions when a teenager’s wishes don’t agree with those of their parents. So, this is the perfect scenario for the appearance of lies.

Teenage lying can show that a young person is yet to find their way and so it lends them an identity.

Let’s emphasize that the shortcuts developed by lies often seem like easy ways to get out of something uncomfortable. However, they’re ephemeral and, therefore, could prove harmful.

There are pros and cons to being a vegan teenager. This is because a diet based exclusively on plants can…

Society as a whole tends to believe that video games mostly affect adolescents in negative ways. However, it is essential to…