Takotsubo Cardiomyopathy: What Is It?

The big difference between takotsubo cardiomyopathy and heart attack is that, in this condition, the coronary arteries are usually not affected. 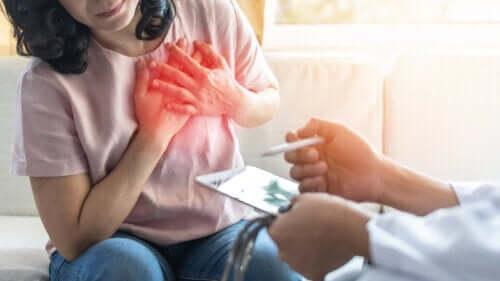 Broken heart syndrome, surprisingly enough, does exist. It’s a disease that has been described recently and whose medical name is takotsubo cardiomyopathy.

It’s a cardiac pathology that occurs temporarily. What happens is that the functioning of the heart is altered, so that symptoms very similar to an acute myocardial infarction occur, although it isn’t completely the same.

Takotsubo cardiomyopathy is usually caused by high levels of stress. Although it can happen to anyone, it’s more common in women between the ages of 50 and 70. It could happen when, for example, a loved one dies.

Although its name sounds dramatic or poetic, this syndrome is real and people who suffer from it have more or less the same sensation as in a heart attack. So, in this article we explain everything you need to know about takotsubo cardiomyopathy and how to distinguish it from other heart diseases.

What is takotsubo cardiomyopathy?

The broken heart syndrome happens when a person suffers a cardiac alteration, normally when facing a situation that brings about very intense stress. Part of the heart alters temporarily and is unable to pump blood normally.

The symptoms that occur are very similar to those of a heart attack. However, in broken heart syndrome, the rest of the heart functions normally. The part that is affected is usually the left ventricle, which takes on a vessel shape.

Another difference with acute myocardial infarction is that, in this syndrome, the coronary arteries remain unaffected. These are the arteries which are responsible for providing oxygenated blood to the heart. Usually, this pathology has a very low mortality rate.

It’s important to note that, as well as a stressful situation, such as the death of someone you love, this condition can be caused by surgery or as a consequence of another underlying disease.

You may also be interested in: Discover How Smoking Affects the Heart

Just like a heart attack, sudden pain in the chest is typical for broken heart syndrome. This is what usually alarms people the most and makes them think they’re having a heart attack, which makes their stress or nervous situation even worse.

There’s also usually some shortness of breath and the person may lose consciousness. Sometimes even cardiac arrest can occur.

The curious thing is that, in the electrocardiogram, the recording of heart waves is very similar to that of the infarction. This, added to the fact that the symptoms are very similar, often leads to a confusion in the diagnosis.

In order to tell them apart, it’s necessary to look at the specific situation of that person. The key is usually at the time of the episode. If you’ve been under great stress, this could help indicate which it is.

Also, those who experience takotsubo cardiomyopathy don’t usually have the typical risk factors for heart attack. Those who suffer heart attacks often have hypertension, cholesterol problems, a history of smoking, and so on.

Broken heart syndrome usually has no sequelae. Having said this, it’s quite common for the episode to repeat itself. As such, it’s important to help this person, both physically and psychologically.

Can takotsubo cardiomyopathy have complications?

As we’ve already mentioned, this is a temporary pathology. It usually doesn’t leave sequelae. In fact, the mortality rate is very low. Most people with it recover fairly quickly.

However, as with any disease, there can be complications. For example, some studies such as the one published in 2018 in the Revista Española de Cardiología link this syndrome with subsequent heart failure. It can also cause the heart to beat irregularly.

In very serious cases, when there’s a lot of damage to the left ventricle, sudden death can occur. However, this happens very rarely and exceptionally.

In conclusion, it’s important to know that takotsubo cardiomyopathy, while similar to infarction, is a different entity entirely. In any case, if you get any symptoms, it’s essential to see a doctor immediately.