Taking Antibiotics During Pregnancy May Be Risky

Taking antibiotics during pregnancy without medical supervision is risky. This is because doctors know which medications are and aren't safe for pregnant women thanks to the ongoing research on this subject. 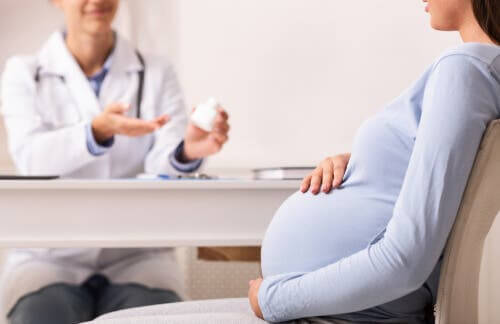 Taking antibiotics during pregnancy is quite common. This is because there are various conditions where a pregnant woman may require antimicrobial treatment and there’s no other way to cure them.
For instance, a doctor would have to prescribe an antibiotic for a pregnant woman with a urinary tract infection (known as asymptomatic bacteriuria in its mildest form).
But the point is that using antibiotics during pregnancy can harm your baby if you don’t choose the right ones. As you know, there are always side effects to consider when it comes to drugs. In fact, they could affect both a pregnant woman and her fetus.
As with everything, there are those who think pregnant women shouldn’t take medications at all, but this is just a myth. Science already proved it’s safe to use some drugs, and antibiotics are among them.
Complete abstinence while pregnant does apply to certain drugs though. For example, certain antimicrobials cannot be prescribed nor used over the counter while pregnant. This is because the results could be fatal.

The impact of this drug on your body is pretty much the same in pregnant and non-pregnant people. Almost all antibiotics leave your body when you urinate.
The renal flow and the volume of urine produced both increase in pregnant women though. This eliminates the drugs faster and, therefore, their concentration in the blood is lower.
Even though it goes out faster, what researchers evaluate in regards to an antibiotic is its ability to enter the placenta and thus reach the fetus. So, if the drug does go into the placenta then the scientist will want to know if it’s teratogenic or not. A teratogenic drug is one that can lead to congenital malformations or miscarriages.
The largest teratogenic effect of an antibiotic can occur in the first three months of gestation. These drugs no longer impact the formation of the organs, but it does impact their functions. In fact, it can be as harmful to a baby even when their organs are fully formed.
Similarly, the use of antibiotics during pregnancy may also impact the placenta. This is because the antibiotics that alter placental function also restrict the growth of the fetus. Thus they could lead to low birth weight.

Read on: Do You Know the Best Natural Antibiotics?

The use of antibiotics during pregnancy is dangerous if you don’t respect the indications and scientific knowledge about them. However, anyone who follows the proper protocol can safely use them.
Penicillin and its family of antibiotics are the safest for a pregnant woman and her fetus. We know this because no investigation has found an association between these drugs and teratogenesis. This is the case even during prolonged use.
The same reasoning applies to the cephalosporin family, also related to penicillin. They’re safe to use. They’re also very useful for treating urinary infections.
Another antibiotic that’s commonly used for urinary infections in pregnant women due to its safety is nitrofurantoin. This antimicrobial is particularly useful for pregnant women who are allergic to penicillin. Thus, it’s a good option.
There’s favorable evidence for azithromycin in studies conducted with pregnant animals. This is why they belong in category B drugs for pregnancy.
These drugs are considered safe to use during pregnancy. This is mainly due to the results of animal research and observations during their use in clinical practice — which is rather frequent. As you can see, all of this experience certifies that they don’t cause birth defects.

Find out more: Illnesses During Pregnancy that Every Woman Should Know About

Antibiotics that aren’t safe to take during pregnancy

Among the antibiotics that are dangerous and, therefore, not recommended during pregnancy we have:

One must also consider the nephrotoxicity of these antibiotics in a mother, not only the risks to her fetus. There may be an adverse effect on the renal function of the pregnant woman, especially when mixed with other types of antibiotics.

Just as with category B drugs, we must mention category X here. This classification, listed in package inserts, is quite informative.
Pregnant women must avoid category X antibiotics. This is because animal and human research, as well as clinical experience, indicate they’re teratogenic. So, don’t consume any drug in class X if you’re pregnant.
Self-medication is always a bad idea. So, consult a doctor who can prescribe and guide you on the proper use of antibiotics during pregnancy. This way you’ll protect both your health and that of your developing baby.
Listeriosis during Pregnancy: What You Should Know
In this article, discover what you should know about listeriosis during pregnancy. Read on to learn more about this illness! Read more »
Link copied!
Interesting Articles
Pregnancy
Exercising While Pregnant: Is it Safe?