Symptoms, Causes, and Treatment of Tonsillopharyngitis

The symptoms of tonsillopharyngitis are usually a sore throat, headache, and general discomfort. Its origin is viral or bacterial, and treatment depends on the causative agent. 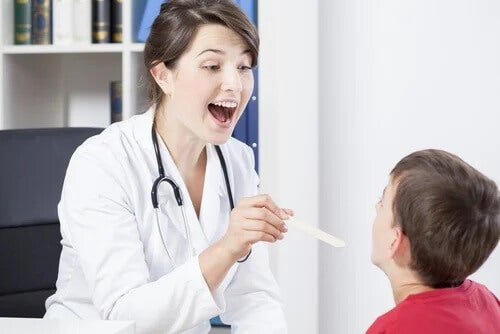 Tonsillopharyngitis is a common condition that consists of an infection of the pharynx and the tonsils. The vast majority of cases are due to a virus, but could also have a bacterial etiology. This means the symptoms vary from one case to another.

Bacterial tonsillopharyngitis is actually quite common in children under 3 years of age. For this reason, it’s more common for this condition to occur during the winter months as viruses have an advantage.

Adults can also experience this disease, a benign condition that usually resolves in a short time. Complications could occur though. Continue reading this article to learn more about the causes, symptoms, and treatments.

What are the causes of tonsillopharyngitis?

Many people currently think that things like eating frozen treats, walking barefoot, or not keeping warm can cause tonsillopharyngitis, colds, and flu, among others. This isn’t the case, however. It’s an infectious condition acquired by contact with a virus or bacteria.

Most cases spread through the air, by droplets expelled when coughing or sneezing. It can also be due to direct contact with someone who already has the bug. The most common microorganisms that cause it are:

These are the ones most frequently implicated in this condition, although many other microorganisms can cause it. The most important thing is to distinguish it through symptoms or tests, be it a virus or a bacteria.

Find out How to Naturally Soothe Swollen Tonsils

As we said above, the symptoms of tonsillopharyngitis vary depending on whether it’s due to a virus or bacteria. However, both cases will most likely manifest with fever, sore throat, and a headache.

Viral tonsillopharyngitis starts gradually and its symptoms are similar to those of the common cold — mild discomfort, slight fever, and tiredness. Furthermore, the tonsils and pharynx are usually red and swollen.

The bacterial form is more intense. It begins abruptly, with a high fever and increased discomfort. The cervical nodes tend to swell and the tonsils are often purulent. In addition, red spots may appear on the roof of the mouth. Sometimes there’s even a skin rash.

Find out more about the Diagnosis and Treatment for Viral Pharyngitis

Usually, the cause of tonsillopharyngitis can be determined by the symptoms. The attending doctor must explore the throat to check for any pus oozing from the tonsils. They’ll also evaluate the degree of inflammation. However, this bug isn’t always easy to identify.

Moreover, proper diagnosis is important because the treatment varies depending on the cause. In fact, doctors sometimes do microbiological analyses to determine it.

For instance, they may do a rapid antigenic detection test as it allows them to know if it’s due to Streptococcus pyogenes. They may also take a culture of the pharyngeal exudate, although this is a much slower process.

Once they know whether the cause is bacterial or viral, they’ll choose the appropriate treatment. For example, they’ll prescribe an antibiotic if the condition is bacterial. Oral penicillin for a week to ten days is the more common approach.

In contrast, viral tonsillopharyngitis doesn’t require antibiotics. Hence the importance of distinguishing between one and the other. This is because unnecessary antibiotics only decrease resistance is created in the microorganisms. In these cases, non-steroidal anti-inflammatory drugs (NSAIDs) are simply recommended to relieve pain.

The most important course of action is to consult a physician if necessary and not to take any medications they don’t prescribe.

It's important to talk about cancer in order to discuss hormonal therapy. This is because this kind of disease encompasses…

Diseases
The Connection Between Oral Health and Fertility

Oral health is much more important than it seems and is apparently connected to fertility. As we'll see, its decay…

Major neurocognitive disorder, also known as dementia, is a condition in which higher brain functions are impaired as a result of neuronal damage. Over time, the patient will lose their autonomy…

Diseases
The 5 best remedies to cure back herpes

Herpes on the back is not only an aesthetic problem. This pathology can have different causes and symptoms depending on…