Symptoms and Causes of Penicillin Allergy

The classification of penicillin allergy is based on the time interval between the administration of the drug and the onset of the reaction. What else should you know? Learn it here! 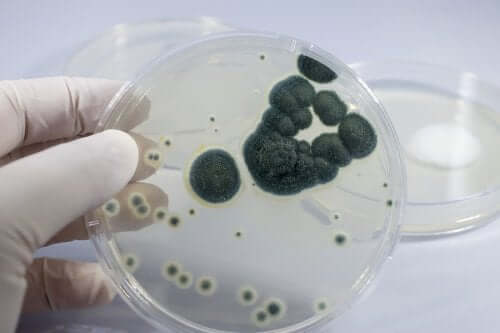 A penicillin allergy is due to an antibiotic that originates from the fungus Penicillium. There are a few types and all have the β-lactam core.

Do you have a penicillin allergy?

Believe it or not, allergy to beta-lactams results in a high index of morbidity and mortality. However, identifying a penicillin allergy diagnosis depends on your clinical history and skin tests.

Types of reactions in a penicillin allergy

Doctors classify allergic reactions to penicillin and to beta-lactam antibiotics in general based on the time interval between the administration of the drug and the onset of the reaction.

These allergic reactions are those that occur within the first hour after drug administration. They’re usually mediated by specific immunoglobulin E (IgE) which rapidly releases histamine and other inflammatory mediators.

The form in which it manifests ranges from mild reactions, such as urticaria, angioedema, and wheezing, to severe like an anaphylactic shock.

This type of reaction manifests between two and seventy-two hours after antibiotic administration. There’s no accurate description of their mechanism, although reactions such as urticaria, angioedema, laryngeal edema, and wheezing may occur.

These reactions occur seventy-two hours or more after administration of the drug. They’re usually mediated by T-lymphocytes and manifest in many ways.

Overall, we can group both accelerated and delayed reactions as non-immediate reactions. Their symptoms include:

Fortunately, the most common reactions aren’t usually serious and manifest as maculopapular rashes followed by urticaria.

Find out about Types of Skin Rash and Their Causes

Testing for penicillin allergy is essential if you suspect hypersensitivity. This is important because people often mistake side effects for allergic reactions.

overall, the description of the symptoms is the basis of a diagnosis, along with the time elapsed between taking penicillin and the onset of the reaction. Also, physicians consider other types of symptoms as well.

Keep in mind that this loss of sensitivity may not be permanent. In fact, resensitization to these antibiotics may occur after a skin test or if you take penicillin again. Also, note that the phenomenon of loss of sensitization isn’t common in non-immediate reactions.

Immediate reactions start with a prick test or an allergy skin test. Then, the attending physician may use one or more determinants and move on to the next step, an intradermal test if the result is negative.

Typically, they do both tests on the forearm and take a reading after 15 to 20 minutes. However, they may start intradermal testing directly with readings at 20 minutes and 48 and 72 hours in non-immediate reactions.

Systemic reactions may occur while conducting intradermal testing. This is particularly true when using various preparations at the same time.

Desensitization is the re-administration of any given antibiotic that may have caused an allergic reaction in progressive doses until reaching the therapeutic dose.

Furthermore, it’s reversible and depends on the continued presence of the antibiotic in the body. It loses its effectiveness when you suspend administration for a period longer than 48 hours.

Read about How Allergies Have Developed

That’s why it’s important to properly and timely diagnose any antibiotic allergies and not mistake them for other reactions.

Penicillin and its Uses
Although penicillin is relatively safe, it can cause a number of side effects. Among them, we include hypersensitivity or allergy to penicillin. Read more »
Link copied!
Interesting Articles
Medication
Progestin-only Birth Control: Benefits and Side Effects