Do You Suffer from Gout? Avoid These 7 Foods

Avoiding the foods mentioned above when treating gout is the key to minimizing and overcoming your symptoms. Instead, we recommend eating foods with anti-inflammatory, analgesic and detoxifying properties that greatly contribute to eliminating this substance. 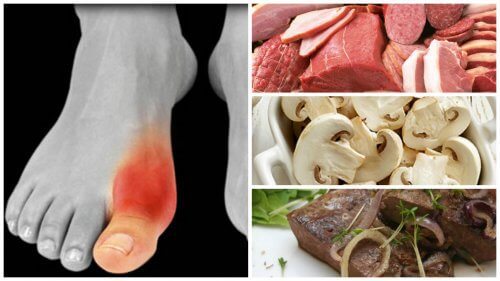 Gout is one of the most painful forms of arthritis. It’s caused by the accumulation of microscopic crystals of uric acid in the body.

It also tends to affect the knees, ankles and other parts of the body that are susceptible to accumulation of said substance. It frequently affects the joints, but also has negative effects on the soft tissues in the body and on the kidneys.

This condition usually strikes at night, when the sufferer experiences intense pain and their big toe becomes red.

It’s even estimated that a high percentage of patients with this problem develop kidney difficulties and kidney stones.

Since this problem produces an inflammatory reaction, it’s commonly accompanied by a continuous sensation of pain, movement difficulties and the deterioration of the affected areas.

Specialists haven’t established its exact cause, but this condition has been linked to:

In addition, poor eating habits and being overweight also act as triggers for gout crises.

Because of this, it’s essential to be aware of some of the foods that can make the symptoms worse and to avoid them as much as possible.

Foods to Avoid if You Have Gout


Eating too much red meat not only increases the risk of gout, but also causes many complications for patients already diagnosed with this condition.

This is because it contains a high amount of purines, in addition to components that increase cholesterol levels and the risk of being overweight.

Consuming this type of meat can cause problems in the inflammatory processes of the body, increasing the retention of uric acid and pain.

Shellfish, commonly known as seafood, should be excluded from gout patients’ diets.

Unfortunately, although many of its compounds are healthy, seafood also contains high levels of purines. This is a type of substance that breaks down into uric acid in the body.

This means that seafood can increase the levels of this substance when ingested and worsen inflammation and pain.


While it can’t be denied that many of beer’s ingredients are healthy for the body, they cause problems for patients with this type of arthritis.

This drink increases the levels of uric acid in the body and, to make matters worse, disrupts the processes that eliminate uric acid.

In addition, its compounds directly affect the inflammatory processes of the joints, while increasing rigidity and difficulty of movement.

Soft drinks and sugary drinks contain corn syrup and fructose, as well as artificial sweeteners that increase the production of uric acid.

Consuming them daily significantly increases your risk of developing metabolic disorders, as well as inflammatory diseases such as arthritis and gout.

In fact, drinking carbonated beverages is linked to the increased tendency to suffer from bone difficulties in adulthood.


While some types of fish help to control inflammation and pain, whitefish is detrimental to patients with uric acid buildup.

This food contains between 50 and 150 mg of purines, which cause difficulties in the treatment of gout.


Delicious, exotic and low in calories, mushrooms are a source of nutrients that many people like to add in various recipes.

However, those who suffer from this gout should limit their consumption of this food. This is because mushrooms increase the concentration of uric acid crystals in the joints.

This food is recommended for those who have anemia, which is caused by a lack of iron. However, it’s not the best dietary option for patients suffering from continuous gout crises.

As with other food sources of animal origin, liver contains a high concentration of purines, which is harmful.

Avoiding the foods mentioned above when treating gout is the key to minimizing and overcoming your symptoms. Instead, we recommend eating foods with anti-inflammatory, analgesic and detoxifying properties that greatly contribute to eliminating this substance.

Effective Natural Remedies to Treat Gout
Gout is a condition produced by the accumulation of uric acid in the joints. Fortunately, there are some natural remedies that can help treat gout. Read more »
Link copied!
Interesting Articles
Health
Period Myths and Misconceptions