Strokes in children may be more difficult to recognize than in adults. Most occur during the first month of life. 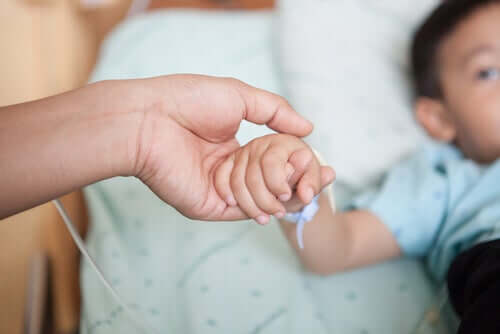 We tend to think that strokes only affect adults. In fact, we associate this issue with age. While it’s true that its highest incidence is in people over 65 years of age, strokes can also occur in children.

Strokes are also known as a “cerebral attack” or “apoplexy”. They consist of the cessation of blood circulation to an area of the brain, either due to hemorrhage or ischemia. As a result, oxygen and nutrients can’t reach that area properly.

Strokes are, fortunately, rare in childhood. Specifically, according to an article published in 2014 in the Revista de la Sociedad Boliviana de Pediatría, their annual incidence increases with age, going from affecting 2-3/100000 children in the first five years to 8/100000 up to the age of 14.

However, they’re an important cause of mortality, currently among the 10 leading causes of death in children. Moreover, the data seem to indicate that their incidence is increasing.

Most of the children who suffer from it usually experience it during the first month of life. In this article, we’ll explain everything you need to know about it so that you can recognize the symptoms and treat it as soon as possible.

What causes strokes in children?

As we’ve already mentioned, a stroke is defined as an interruption of the blood supply to some part of the brain. In addition, it produces certain neurological symptoms that last for at least 24 hours.

In adults, most events are related to risk factors such as hypertension or atherosclerosis. However, in children, the causes are quite different. Development during pregnancy, the time of birth and certain malformations are determining factors.

It should be noted that one of the main causes is a lack of oxygen during birth. Other important factors are cerebrovascular accidents that arise as a consequence of trauma. Other relevant causes are:

The truth is that, at this stage of life, people are very fragile. They can also occur during infancy or adolescence, but the greatest number occur in relation to the first month of life, as we’ve stated above.

Also read: Risks of a High Sugar Diet During Pregnancy

How to identify strokes in children?

Most people know how to recognize this situation in adults. It very commonly affects speech and the mobility of a part of the body and, in addition, the person feels weak. In infants, however, it can be difficult to recognize a stroke.

When it occurs in connection with birth, babies may not show symptoms until they grow and develop. In fact, many of them may not even experience any. The predominant symptom is seizures.

Other warning signs in infants include developmental delay and difficulty eating. Some babies even find it difficult to breathe properly. In some patients, a sudden paralysis on only one side of the body appears, as occurs in adults.

Strokes in older children have symptoms that increasingly resemble those of adults. They may experience:

How are they treated?

If you see any of these abnormalities in a child, you must take them to the emergency room urgently. As we’ve seen, symptoms can go unnoticed. Therefore, it’s important to pay attention to them and visit the pediatrician frequently.

The treatment of strokes in children is complex and will depend on the cause of the stroke. In the case of seizures, children most often require treatment with antiepileptic drugs.

If there’s a malformation or congenital problem, this should be addressed. In addition, most children who experience this health issue require rehabilitation. This is an attempt to recover the functions of the affected area.

Anxiety in Children: When Should I Be Concerned?
The symptoms of anxiety in children can be diverse: Physical discomfort, problems falling asleep, and more. Read more »
Link copied!
Interesting Articles
Illnesses
Swimmer's Itch: Causes, Symptoms and Treatment

Health
Medical Treatment for Calluses on Hands and Feet

Calluses are growths on the outermost part of the skin; calluses usually appear on the hands and feet. They're also…