There are many risk factors and symptoms of a stroke. For instance, it can cause sudden headaches, loss of vision, or hemiplegia. 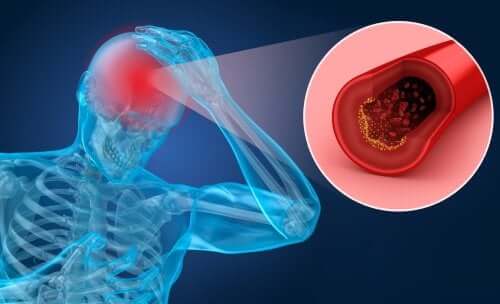 A stroke is an abrupt neurological syndrome that comes with many risk factors and symptoms. It either involves bleeding or loss of blood circulation in the brain.

When the blood supply doesn’t properly reach the brain, then the death of brain tissue occurs. Thus, it results in a neurological deficit that can lead to disability or even death.

In reality, the term stroke simply refers to either bleeding or blood disruption in any organ. Thus, there are many types of strokes depending on the affected organ. In any case, the use of the word on its own usually refers to a cerebrovascular accident.

The prevalence of strokes is high, especially among the elderly. So, it’s important to know the symptoms and risk factors that could lead to it.

Currently, the terms stroke, ictus, and cerebrovascular accident are often used as synonyms. However, there are some differences:

There are many risk factors for stroke. On the one hand, there are the non-modifiable risk factors, which include age, sex or family history. From the age of 55, the risk of having a stroke doubles with every 10 years that go by. In addition, there’s a higher incidence in men than in women. Note also that if a family member already had a stroke, the possibility of its occurrence increases.

On the other hand, there are several modifiable factors:

You may be interested: Insomnia Increases the Risk of Heart Attack and Stroke

Symptoms vary depending on the affected brain area. They could be sensory, motor or mixed. The most common are:

However, there are situations in which a stroke may be of low intensity and duration and goes unnoticed. So, there may only be subtle muscle weakness, small episodes of amnesia and/or disorientation.

Should any of these symptoms occur, then you must go to the emergency room. A stroke is a time-dependent condition and you must treat it as soon as possible.

When confronted with a stroke, it’s very important that you go to a hospital as soon as you can so you can begin early treatment. Keep in mind that you’ll only be able to recover any affected brain functions throughout the first hours.

Exploding Head Syndrome: Have You Ever Had It?
Exploding Head Syndrome is a type of parasomnia. It consists of a sudden awakening where the person experiences an intense headache followed by a violent sound, like an electric shock. Read more »
Link copied!
Interesting Articles
Illnesses
All About Lichen Planus