Stephen Hawking's Message to People Who Are in a "Black Hole"

In spite of his physical limitations, Stephen Hawking is an example of strength and overcoming obstacles. He never allowed his condition to weigh him down psychologically. 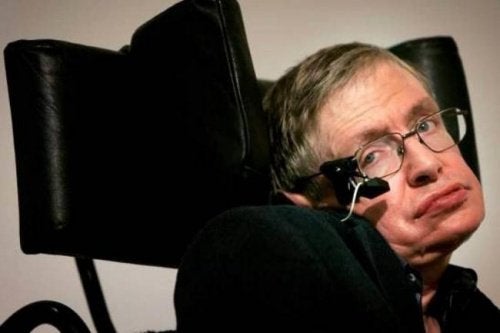 Stephen Hawking was one of the most admired men of our times. He’s recognized not only for having one of the brightest minds, but also as an example of triumph over adversity.

He was born on January 8th, 1942 in Oxford, England, and died on March 14th 2018. He’s known around the world for his research in the field of theoretical physics.

As a child, one of his dreams was to study mathematics. However, for various reasons, he decided to switch to Natural Sciences shortly after starting university.

During his first year at Cambridge, young Hawking, who was barely 21 years old, started to experience the first symptoms of a disease called amyotrophic lateral sclerosis (ALS), which would change his life forever.

Back then, doctors predicted that he only had around two and a half years to live, at most. However, Hawking overcame these expectations and went on to become one of the most important people in science.

In spite of his physical condition, Hawking gave hundreds of speeches around the world. He shared his wisdom in millions of documentaries and books, which have served to further research into a variety of different topics.

But beyond simply knowing how the universe works, he also knew a lot about life and the most difficult stages that humans can experience.

At one of his last conferences, he compared depression to a “black hole”, sharing interesting reflections with examples based on his own life.

Stephen Hawking sent out a beautiful message to people with depression

On various occasions, he mentioned that his expectations were reduced to zero when he was first diagnosed with ALS. But he ended up realizing that every aspect of his life was an advantage.

Stephen Hawking dedicated his entire existence to scientific research and the search for answers to the mysteries of the universe. Although he couldn’t move or speak, he found a way to communicate with and inspire the entire world, living life to the full despite his disease.

In a speech given at the Royal Institute in London back in January 2018, Hawking compared black holes to depression, making it clear that neither of them are impossible to escape from.

The message of this lecture is that black holes aren’t as black as they’re painted. They’re not the eternal prisons they were once thought.

Things can get out of a black hole, both to the outside, and possibly, to another universe. So, if you feel you are in a black hole, don’t give up – there’s a way out.

In response to his own disabilities, he added:

Although people should have the right to end their life if they wanted to, I think it would be a great mistake. However bad life may seem, there is always something you can do, and succeed at.

While there’s life, there is hope.

If you are disabled, it is probably not your fault, but it is no good blaming the world or expecting it to take pity on you.

One has to have a positive attitude and must make the best of the situation that one finds oneself in; if one is physically disabled, one cannot afford to be psychologically disabled as well.”

A source of inspiration

Even after his death, Stephen Hawking continued to inspire scientific minds. However, he also inspired people who, in some way or another, have experienced great difficulties in their own lives.

Read more here: Depression and Anxiety Are Signs of Strength

Hawking considered science to be a great field for people with physical disabilities, as the work primarily takes place in the mind. He pointed out that while physical work is out of the question, theoretical work is ideal.

He also recognized that many of the things he accomplished were only possible because of the help of his loved ones, colleagues, and students, who were always there to support him.

I think people in general want to help. But you need to make them feel like their efforts to help you are worth it.

His daughter, Lucy Hawking, shared a few words about her father:

He has a very enviable wish to keep going and the ability to summon all his reserves, all his energy, all his mental focus and press them all into that goal of keeping going.

But not just to keep going for the purposes of survival but to transcend this by producing extraordinary work – writing books, giving lectures, inspiring other people with neurodegenerative and other disabilities.

Stephen Hawking’s words have been shared around the world as a message for people who have fallen into depression and its limitations.

His words of support for those suffering from depression will transcend and endure the test of time, just like his theories of the universe.

Mental Tools to Help Deal with Depression
When we have self control, everything flows correctly. Knowledge of mental tools when we are dealing with depression is a great help in the treatment of psychological conditions. Read more »
Link copied!
Interesting Articles
Healthy mind
The Dunning-Kruger Effect - Why Does It Happen?