Some Side Effects of Vitamin C

It's difficult to think of side effects of vitamin C, but don't be fooled, they do exist! They're infrequent and are mainly associated with the interaction of the vitamin with other compounds. 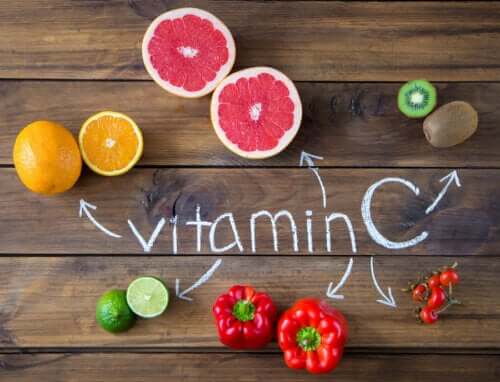 Some side effects of vitamin C in the body may appear, albeit in minimal proportions. Much more is known about the beneficial effects of this substance on the body, than about the possible complications that can result from taking it indiscriminately.

Let’s begin by remembering that vitamin C is a necessary nutrient for body tissues. All the vitamin C needed must be acquired from outside, as the human body is unable to synthesize it by its own means.

The main source is food. This vitamin is water-soluble, i.e. it dissolves in water. Once it enters the body, it’s utilized until the necessary amount is used. What’s left over is eliminated in the urine.

It’s this automatic elimination mechanism via the kidneys that makes adverse effects unlikely. Large amounts of vitamin C would have to be ingested to notice side effects, while there would have to be a problem with its renal excretion.

Vitamin C has the essential function of repairing and supporting tissue growth, especially in the skin and the osteoarticular system. Its effects on blood vessels are not negligible either.

The most important functions of vitamin C are:

Science has shown that vitamin C is a powerful antioxidant. Antioxidants are substances that inhibit part of the effects that free radicals have on cells.

Free radicals are constantly formed during the body’s metabolism, especially in the process of absorbing nutrients and energy from food. As free radicals accumulate, cell damage and tissue aging increase.

Scientists believe that free radicals could have an impact in the generation of some cancers, heart disease and osteoarthritis. The possibility that vitamin C partly blocks the damaging effects of this aging process is good news.

Keep reading: Is Taking Vitamins to Have More Energy a Good Idea?

The adverse effects of vitamin C would appear when the intake is excessive. The main sources of this vitamin are fruits and vegetables, especially citrus fruits. Other fruits with good doses of vitamin C are:

Among vegetables, green vegetables are the richest in this substance. We can also mention broccoli, cauliflower, spinach, and cabbage. Peppers and tomatoes are also good sources.

In some countries there’s legislation that obliges food producers to add vitamin C to their products. This is known as fortified foods.

In addition, the cooking process applied to vitamin C-rich foods can alter their availability. Both cooking and exposure to sunlight are capable of altering the amount of vitamin the food offers to the body.

So, after analyzing its functions in the body and where we obtain it from, we’re ready to talk about the side effects of vitamin C. These can appear when we ingest over two thousand milligrams of vitamin C per day.

The first adverse effect that appears is gastrointestinal. High doses of vitamin C can cause heartburn, pyrosis, and even diarrhea. Doctors don’t recommend high amounts of vitamin C during pregnancy because they affect the baby.

Another side effect of vitamin C is the formation of kidney stones. A study published in Clinical Nephrology has observed that, in excess, the metabolism transforms it into oxalate, and the oxalate tries to escape through the urinary tract, accumulating in the urine and producing renal lithiasis.

When there’s a pre-existence of certain diseases, the body may react badly to vitamin C overdose. Patients with G6PD deficiency suffer from hemolysis – destruction of red blood cells – in the context of high vitamin C intake, while hemochromatosis patients may worsen.

Also learn about: Preserving Vitamins: Everything You Need to Know

Adverse effects of vitamin C due to interactions

Aside from the adverse effects of vitamin C due to excessive intake, we have to consider the interactions of the substance with other substances:

Too much vitamin C can be counterproductive

In conclusion, adverse effects of vitamin C are rare; however, they can appear. Moreover, in some cases, this vitamin has significant interactions with other substances.

Six Recipes that Are Rich in Vitamin C
Are you looking for a diet that's rich in vitamin C? You can easily meet the recommended daily amount by eating certain types of food. Read more »
Link copied!
Interesting Articles
Diet
What's a Cheat Meal?