It's scientifically proven that smoking tobacco damages the oral cavity and increases the risk of oral cancer, oral lesions and periodontal diseases. Continue reading to find out about other harmful effects of this habit. 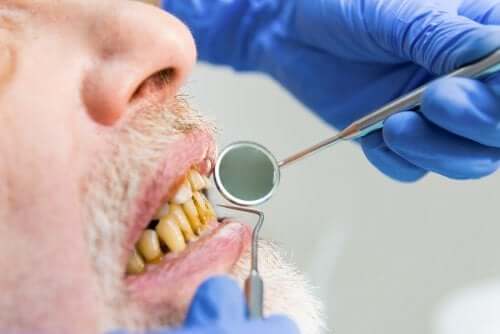 The mouth and oral cavity are the first parts of the body affected by smoking tobacco. This is because they’re the first to come into contact with this substance. Thus, its manifestations are quite evident there. In fact, smoking causes all sorts of damage at this level, continue reading to learn more about it.

A professional can tell when a person smokes just by looking at them. One of their main objectives, due to these harmful and rather noticeable consequences, is to prevent or reduce the smoking habit of their patients as far as possible.

According to a study published by the Iranian Journal of Public Health that evaluated the damage of second-hand smoke, the oral manifestations vary from person to person. Of course, the effects are even higher in those who do smoke.

In general, there are certain alterations that go way beyond aesthetics and compromise a person’s health. These are some of the most important ones:

Similarly, research published by the Journal of Wound Ostomy & Continence Nursing details that people who quit smoking experience benefits such as:

As if the above-mentioned consequences weren’t enough, we’re now going to delve a little deeper into the damage caused by smoking and the enormous health risk it represents.

Most smokers have yellowish-brownish stains on their teeth. These stains can be removed with certain methods a dentist may suggest, such as ultrasonic cleaning. It’s also common to have brown stains on the gums.

Both the sense of smell and taste are lessened due to the effects of tobacco in people who smoke. It may seem like a minor issue although it implies that a smoker might have to add more salt to their meals in order to taste something.

This excessive consumption of salt can lead to an increase in blood pressure and fluid retention. At least according to an article in Medline Plus. In turn, these two problems can lead to much more serious illnesses.

Studies, such as the one published in the Journal of Wound Ostomy & Continence Nursing cited above, indicate that there’s a direct connection between smoking tobacco and slow wound healing, increased postoperative pain, and the risk of infection. This is because tobacco leads to vasoconstriction, which decreases the blood flow to the wounds.

People who smoke have a much higher risk of suffering from periodontitis, which can affect the health of the gums, ligaments, bones, and periodontal pockets in the oral cavity. This also implies a higher risk of losing teeth as a result.

The cited studies affirm that smoking seriously harms the success of dental implant treatments, both in the short term in the integration of the implant with the bone and in the long term, thus decreasing half of its life.

To increase the probability of success of an implant, a study published by the Journal of International Society of Preventive and Community Dentistry suggests stopping smoking at least a week before implant placement and avoiding this habit for up to eight weeks afterward.

As the above-mentioned research confirms, the relationship between tobacco and oral cancer is scientifically proven. Likewise, the combination of tobacco with alcohol and other unhealthy lifestyle habits increases this risk exponentially.

Tobacco pigments the oral mucosa and gums and it results in brown spots. Generally, the stains are not malignant and disappear about a year after quitting.

8. Its effects on saliva

Smokers’ saliva contains substances present in tobacco smoke, which are potentially carcinogenic — as highlighted by a Journal of Dentistry publication. In addition, they observed a higher concentration of bacteria predisposing to dental caries, such as Streptococcus mutans.

Read about Smoking Cessation: How to Address Each Stage

There’s a direct relationship between smoking and tooth loss. This relationship may be due to both periodontitis and an increase in carcinogenic bacteria in the saliva, which increases the total risk of cavities.

In addition to the damages in the oral cavity, smoking in general causes many other problems and illnesses. For instance, cardiovascular diseases, lung diseases, aneurysms, and heart attacks, among others.

Beyond its addictiveness and the damage of second-hand smoke in passive smokers, science has demonstrated that smokers are at a greater risk of oral cancer, oral lesions, and periodontal diseases.

The best way to avoid all these problems is prevention. Don’t pick up the habit of smoking, to begin with, and reduce it as much as possible if you’re already a smoker. These measures are fundamental to maintain your overall good health.