Sleeping on Your Side Reduces the Risk of Fetal Death

When pregnant, sleeping on your back can place pressure on the blood vessels because of the weight of the baby. It can make it difficult for blood as well as oxygen to reach the fetus. 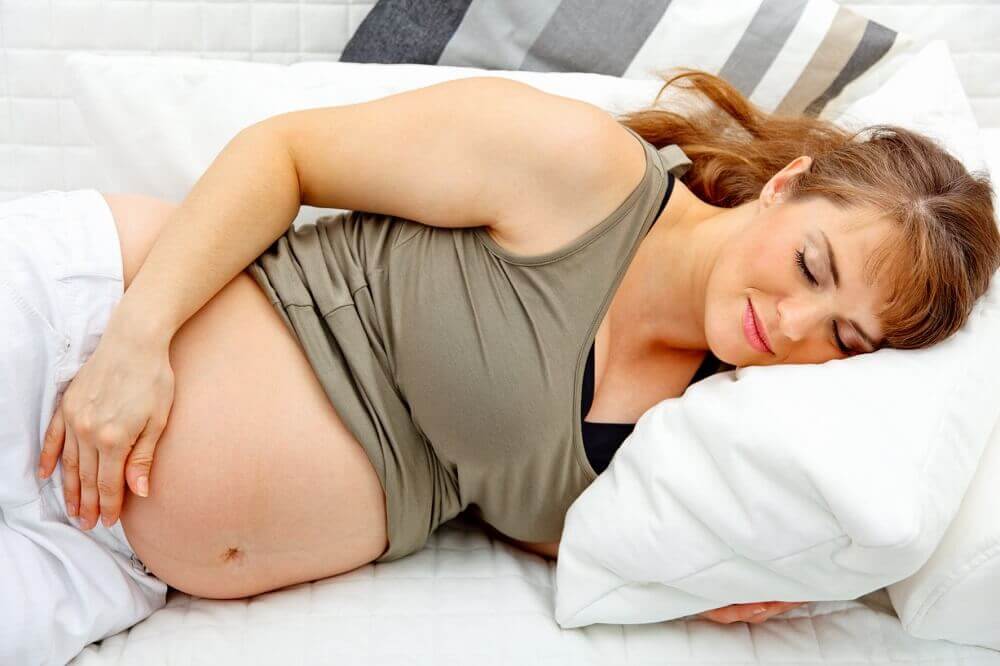 Pregnancy doesn’t tend to be a time in a woman’s life when she gets a lot of restful sleep. The growth of the abdomen and the need to urinate turn into an impediment to be able to sleep without interruption. However, many women manage to find the most comfortable position possible, so that at least it’s not a major problem. And, this is often sleeping your side to reduce the risk of fetal death.

The point is, it seems that sleeping on one’s back in the last trimester of pregnancy is not a good practice.  It can cause serious risks for the fetus.

In the UK researchers published an article in the Journal of Obstetrics and Gynecology. They found that sleeping on the back in this stage of pregnancy can double the risk of fetal death.

Contrary to this, researchers discovered that mothers who slept on one of their sides had less risk of this fatal outcome.

Compiling the data of 1000 women in their last trimester of pregnancy, the authors of the MiNess Study came to the conclusion that the side position when lying down to sleep is safer for the baby.

The experts suggested that sleeping on the side after the 27th week of pregnancy decreases by 3.7% the possibility of fetal fatalities.

In addition, sleeping on the back increases the risk of fetal death 2.3 times. This is after the 28th week of gestation. Also, it is in comparison to the mothers who sleep on one of their sides.

This study has turned into the most extensive of the last decades in this field. This confirms the results of other smaller studies of this type. Those were carried out in New Zealand and Australia according to the BBC.

This same study group, in the UK, where the study was done, found that one of every 225 pregnancies ended in fetal death.

Also read: 6 Tips to care for your body during pregnancy

Why does sleeping on the back increase the risk?

Up until now, there is no explanation as to the relationship between sleeping on one’s back and major risk to fetal death.

However, one of the hypothesis suggests that when a woman is on her back, the weight of the baby combined with the weight of the uterus exerts pressure on the blood vessels. This can block circulation and oxygen to the baby.

Since the reason hasn’t been confirmed, and requires more study, as a preventative measure, researchers recommend sleeping on one side during the last trimester of pregnancy.

It doesn’t matter whether a woman sleeps on the left side or the right side. In fact, she can put a pillow against the back to avoid turning during sleep.

Should I worry if I wake up on my back?  Is this dangerous for my baby?

Experts claim that pregnant women don’t have to worry if they wake up on their backs. The most important point in these cases is the position they are in when they fall asleep. They are in that position longer.

Alexander Heazall, director of Tommy’s Stillbirth Research Center in St. Mary’s Hospital in Manchester, UK, was also the director of the study done in that country.

This specialist recommended, additionally, that women in this stage of pregnancy sleep on their side at any time they sleep. This includes naps during the day.

We recommend: Roseola during pregnancy

What I don’t want is that women wake up on their backs and think: On no, I’ve done something horrible to my baby. What we said was very specific in terms of the position in which a woman goes to sleep. This is important because more time is spent in this position than in any other. Besides, you can’t do anything with respect to the position you find yourself in when you wake up. You can decide the position you are in when you fall asleep.

The publication of this study and the recommendations of the researcher coincide with the launching of the Sleep On Side Campaign. This is directed by the organization to benefit Tommy’s (hospital)

• The principal objective is to educate pregnant women about the possible risks of sleeping on their backs during the last months of pregnancy.

HIV/AIDS Vaccine Soon to Be Tested
HIV/AIDS continues to be one of the main public health issues in the world. According to data from the World Health Organization (WHO), it has claimed the lives of at least 35 million people. Read more »
Link copied!
Interesting Articles
Pregnancy
Do Home Pregnancy Tests Work?