Excessive earwax can lead to a variety of problems. Thankfully, removing earwax at home isn't so difficult. 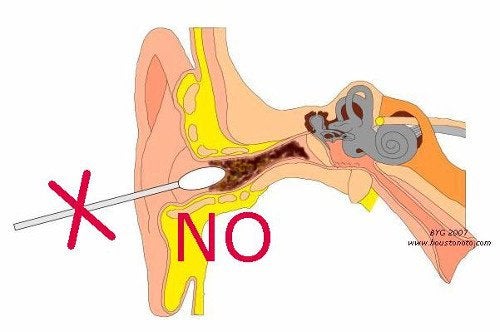 Earwax is naturally found in the inner ear. Its function is to protect the ear from bacteria and other particles or organisms that can harm this delicate area. In addition, the wax acts as a natural lubricant for the ear and ear canal. But there comes a time when it accumulates in large quantities. This situation can cause discomfort for some. Furthermore, it can lead to bigger problems such as irritation, dizziness, loss of hearing, a feeling that there’s something stuck in the ear, and itching. That’s why removing earwax periodically might be advisable.

What causes earwax to build up?

Before we talk about the ways you can remove excess earwax at home, it’s important to know what’s causing the discomfort from your earwax buildup. Earwax can become annoying or irritating when it forms into a blockage within the ear canal. This blockage usually occurs when you use cotton swabs like Q-tips on a regular basis to clean your ears. This forces some earwax to be pushed deeper into the ear canal and build up, which makes removing earwax harder.

People who regularly wear earplugs or the popular earbud headphones are also at a higher risk for the excessive accumulation of earwax.

What are the symptoms of too much earwax?

When there’s too much wax built up in your ear, you’ll probably experience some of the following symptoms:

To keep from suffering the above consequences of excessive earwax buildup, it’s important that you clean them on a regular basis and remove some of the earwax so it doesn’t create a blockage. We recommend that you avoid using Q-tips or other swabs, and instead try the following home remedies to remove earwax.

Saline solution is a great option for removing earwax. All you have to do is dissolve one teaspoon of salt (7.5 g) in ½ cup of water (100 ml). Then just soak a cotton ball in the solution and let a few drops fall into your ear while you tilt your head to one side. Hold this position for a few minutes to let the liquid penetrate the ear canal and soften the wax. Then tilt your head in the opposite direction and use a tissue to capture the liquid as it drains out.

One of the safest and most effective home remedies for earwax removal is paraffin oil, which is sold in most pharmacies. All you need to do is heat two to three tablespoons of this oil over a candle flame. Drop a few drops in your ear and lie still for a few minutes. Then use warm water to rinse out any traces of wax. Do this for three days in a row to completely dissolve the buildup.

Mix equal parts of hydrogen peroxide with water. Make sure the hydrogen peroxide is the commercially available 3% strength variety. Place a few drops in your ear and shake your head gently to let it penetrate the ear canal. Leave the drops in for a few minutes before tilting your head to the opposite side as the liquid drains out.

Glycerin is a natural product that helps soften earwax for easy removal. You can find it in pharmacies and use four drops in each ear, three times a day for the best results.

Mix equal parts white vinegar and rubbing alcohol in a small bowl. Dip a cotton ball into the mixture and apply a few drops to each ear.

Olive oil is another great ingredient that helps soften earwax and facilitate its removal. Put two or three drops of olive oil in the affected ear before going to bed, and try to sleep on the opposite side. Repeat this treatment for three or four nights in a row.

12 Tricks to Rid Your Home of Dust
Next time you dust you can try a few homemade tricks that will make that unpleasant job much easier. Learn all about them here! Read more »
Link copied!
Interesting Articles
Naturopathy
5 Infusions to Treat Bladder Stones