High uric acid levels can cause health disorders. Fortunately, you can make some herbal teas with properties that promote its expulsion. In this article, discover how to make them. 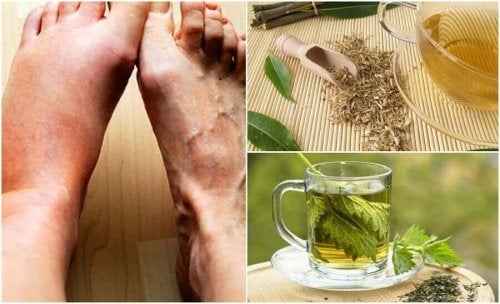 Do you need to lower your uric acid levels? The body produces this waste when it metabolizes the purines that some foods contain. Normally, the kidneys are in charge of filtering it and, later, of eliminating it through the urine. So, did you know that you can use herbal teas to lower uric acid levels?

However, sometimes, there are difficulties in carrying out this process, since the body produces too much of it or reduces its ability to expel it. As a consequence, a disorder known as hyperuricemia originates, which can trigger other problems, such as gout.

It’s very important to help your body reduce uric acid levels. Although uric acid accumulation initially goes unnoticed, over time, it can cause joint inflammation and pain. Thus, if your blood tests showed high uric acid levels, it’s essential to follow some treatment to regulate them.

Natural remedies, including herbal teas, stimulate kidney function to facilitate uric acid excretion through urine. However, it’s important to consult your doctor before drinking them, since they aren’t appropriate in certain cases.

Discover: How to Make an Anti-inflammatory Diet to Treat Uric Acid

Scientific evidence suggests that consuming ginger tea decreases the pain associated with uric acid accumulation in the joints. Although further evidence is needed to corroborate these effects, this remedy is a good option to complement the treatment of conditions such as gout.

Celery tea is a useful remedy to lower blood uric acid levels. For many years, it’s been one of the best supplements against gout, fluid retention, and urinary problems.

This herbal remedy is traditionally used for problems such as gout and joint pain. It has diuretic properties that help promote kidney function to increase urine production and lower uric acid levels.

Make sure you read: Fight Uric Acid Crystals with These Natural Remedies

One of the traditional herbal teas to lower uric acid levels is hibiscus tea. This flowering plant reduces the accumulation of uric acid in the blood, preventing it from being deposited in the joints.

Dandelion tea has important kidney health benefits. Due to its diuretic properties, it increases urine production and facilitates the expulsion of waste substances from the body. Although it isn’t a proven remedy for gout, drinking it can help to control hyperuricemia.

Birch has a cleansing effect on the blood that helps lower uric acid levels. Likewise, it favors the expulsion of toxins and reduces renal system load.

It’s important to remember that the effectiveness of the remedies we shared here can vary in each person, depending on their particular condition. There’s limited evidence regarding their action. Most of this evidence is anecdotal data that should be corroborated with more research.

Nevertheless, herbal teas can be considered a complement to any treatment. Of course, to use them safely, it’s essential to consult their side effects or contraindications before drinking them.

10 Home Remedies for Excess Uric Acid
Uric acid is a waste product your body produces when you metabolize purines, a compound that’s found in certain foods. This substance travels through your bloodstream and is later eliminated through the urine after being processed though your kidneys. Read more »
Link copied!
Interesting Articles
Medicinal plants
Nux Vomica: What You Need to Know