If you want to learn a simple recipe for cinnamon cookies, this article is for you! Plus, we have a healthy version with oatmeal that you'll love. 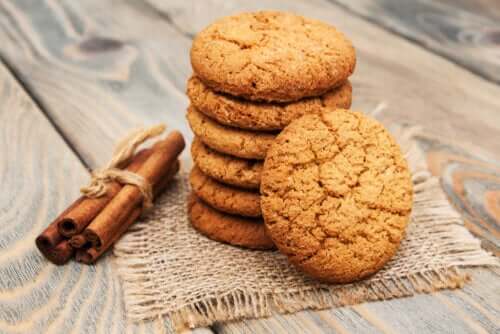 Cinnamon cookies are an ideal classic to accompany tea time or breakfast and snacks. Besides, if you’ve never tried them or if you made them and didn’t get the taste you wanted, this article is for you! Today we want to give you a simple recipe for cinnamon cookies that you can try out at home.

According to a study published in 2014, cinnamon, besides being an essential ingredient that provides a unique flavor, is a medicinal plant that provides benefits for the human body.

Thus, this spice is a natural coagulant, increases the circulation of uterine blood, and promotes tissue regeneration. Also, it provides components that have antioxidant, antidiabetic, antimicrobial, and antifungal capabilities.

Although cinnamon is a common ingredient in sweet preparations, some people won’t tolerate it because it’s invasive, not only to taste but also to smell! So, if you want to make this recipe to share with friends, make sure they don’t have any issues with it.

The general recommendation to make these cinnamon cookies is to keep in mind that the ingredients must be at room temperature and that the amounts have to be exact. Now, here’s what you’ll need and how to make them step by step.

Read on: 3 Cinnamon Remedies For Patients with Pre-diabetes

Step by step to assemble the dough

You can make other variations, for example, using different ingredients that combine well with cinnamon, such as ginger. In fact, you can create a healthier version by replacing sugar with sweetener and regular wheat flour with oatmeal.

So, if you make these changes, you’ll obtain a recipe that provides fewer calories and adds health-promoting elements such as dietary fiber. Concerning this, the Spanish Foundation of Nutrition suggests that this component that oats provide can diminish blood cholesterol, control the levels of sugar in the blood, improve the secretion of insulin, and reduce the risk of coronary disease.

If the dough gets sticky, you can add more flour or oatmeal until you get the necessary consistency to mold the cookies.

Cinnamon cookies are ideal for dessert, to accompany coffee, or to indulge a craving. Besides, making them is a simple task and you don’t need any unusual ingredients.

Keep in mind that, from these recipes, you can make other varieties by adding additional ingredients such as using fruits. This combination will make your cookies have a moist consistency and you will also be adding nutrients without increasing the caloric intake.

Finally, we want to remind you that cinnamon isn’t only a spice that provides flavor – it also provides important benefits for human health because it has active compounds that make it a natural antioxidant, anti-inflammatory, and antimicrobial.

So, what are you waiting for?

Delicious Low-Fat Cinnamon Ice Cream
Even if you don't think it's possible, you can make delicious low-fat cinnamon ice cream. We'll prove it to you with this recipe that you're going to love.  Read more »
Link copied!
Interesting Articles
Desserts
How to Make Dairy-Free Coconut Ice Cream

This sugar-free coffee cake with blueberries is an ideal dessert for family gatherings or parties with friends, as it's very…