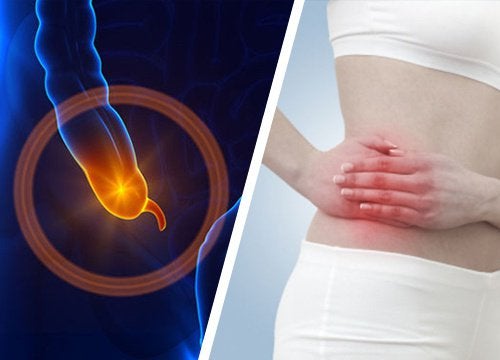 The appendix is an organ in the shape of a sac that’s connected to the large intestine. It’s an organ that doesn’t perform any vital functions. Because of this, you can live a healthy life without it. However, you cannot do so if you develop appendicitis.

Appendicitis is when the appendix becomes inflamed. If not treated, the appendix can burst. This puts you in a situation that can put your life at risk.  It’s important that you get medical attention immediately if you have any symptoms of appendicitis.

This inflammation can cause many symptoms. In addition, your appendix can rupture anywhere from 48 to 72 hours after the problem appears. Because of this, you should know the symptoms of appendicitis so you’re aware of them if they happen to you.

The first symptoms of inflammation generally include the slow appearance of cramps, diarrhea, or abdominal pain. Your appendix grows large and inflamed. Because of this, the mucous membrane in your abdomen becomes irritated.

This irritation can cause acute pain in the lower right part of your abdomen. This needs to be constant and severe to be consistent with the beginning of appendicitis symptoms. However, some people can feel the pain in other areas, too, especially the lower back or the pelvis.

Appendicitis usually causes fevers between 98.9ºF and 100.4ºF. You can also experience cold sweats. If your appendix bursts, the resulting infection can raise your temperature. Your temperature could rise to 100.9ºF. This also increases your heart rate.

Appendicitis can cause symptoms like nausea and vomiting. It’s possible that you lose your appetite and feel like you can’t eat. You can also suffer from constipation or severe diarrhea.

You could even have problems including difficulty passing gas. If this happens, it could be an indication of partial or total obstruction of your intestine. And, of course, this could be related to the underlying inflammation.

Symptoms of appendicitis in children

Children aren’t always able to describe how they feel. It’s also possible that they have trouble identifying the place of the pain at the time. They might say that their whole abdomen hurts.

Because of this, it can be a difficult task to determine if this pain is caused by appendicitis. After all, it’s possible to confuse it with something else. It might sound similar to a stomach virus or a urinary tract infection. However, it’s always better to be cautious when there are symptoms of appendicitis.

A ruptured appendix is very dangerous for anyone. But the risk of death is much higher in babies and young children. Children under two years of age sometimes show the following symptoms when they are suffering from appendicitis:

Children and adolescents older than that are more likely to feel the following:

Symptoms of appendicitis during pregnancy

During pregnancy, the appendix is much higher due to the growth of the uterus. Because of this, it’s possible that you will feel pain in the upper part of your abdomen instead of the lower right. Pregnant women who suffer from appendicitis are more likely to experience symptoms such as:

What are the risk factors? Can I prevent appendicitis?

Appendicitis can appear at any age. But, it usually appears between the ages of 10 and 30 years old. It is also just as common in men as it is in women. You can’t prevent it, but you can take some precautions to reduce the risk.

It’s possible that you will have a smaller chance of suffering from it if your diet is rich in fiber. You should increase the amount of fruits and vegetables you eat. Some foods with a high fiber content you should eat are:

Increasing your fiber intake prevents the appearance of constipation. It also reduces the future accumulation of fecal matter. This is usually the most common cause of appendicitis.

Remember that you need to get to your doctor immediately if you or someone close to you has symptoms of appendicitis. It’s always better to have a professional’s opinion and avoid putting yourself or others at risk.

There aren’t any home remedies that can help you. And, it’s possible that many of them will end up making things worse. Therefore, a doctor is the only person who can determine if it really is appendicitis.

It’s possible that they will ask you for a blood and urine sample. They use these to look for infections. They may also want to do an abdominal sonogram or tomography. These tests can be used to determine the inflammation level of your appendix.