It is important to recognize the signs of strokes in time to be able to receive medical attention. This can mean the difference between life and death. 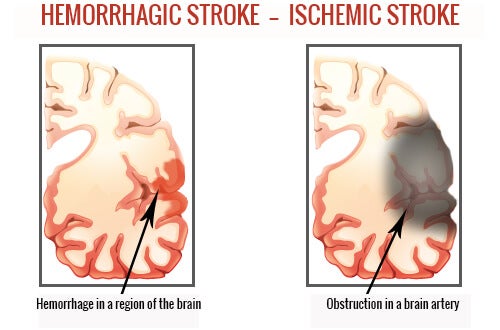 Cerebrovascular accidents, also known as strokes or ictus, require immediate attention. The time between the onset of the first symptoms and that of receiving medical attention should not be longer than four hours.

Every minute counts when it comes to avoiding the worst consequences. Seconds can mean the difference between life or death

Strokes can occur at any age, but are more frequently suffered by people who are over 30. Men have a higher probability of suffering a stroke than women.

It’s good for all of us to be able to recognize the signs of a stroke, whether to aid a family member or friend that’s experiencing this situation or to detect one in ourselves and quickly call for an ambulance.

What are the warning signs?

Pay attention to the following symptoms. Even if they disappear, you should still see a physician to examine you.

Also Read: 6 Tips to Help You Prevent a Stroke

Strokes are caused by the obstruction or rupturing of an artery in the brain.

There are two types:

How do we prevent them?

Experts link this condition to illnesses such as arteriosclerosis or high blood pressure.

For that reason, we should control these situations and avoid bad habits such as the below.

You should get routine checks to be aware of any changes in your circulatory system. This is especially true if they affect your carotid arteries. These are responsible for carrying blood, and therefore oxygen, to the brain.

Recuperation after suffering a stroke depends on how quickly the patient received required medical attention, first of all. It also depends on the injuries it produced in the brain and on the immediacy of the neurological rehabilitation process.

The body that has suffered a stroke also acts as if it has lost its memory. That’s why it may be necessary to reteach it many movements that it had already learned and mastered.

Psychological support is as necessary for the patient as it is for the family.  The changes are significant in the family of a patient with symptoms of a stroke: helplessness, depression, daily exhaustion, etc.

The person who is affected goes from performing his activities in an independent manner to suddenly being completely or partially dependent on others.

Nothing is certain in the recovery. Progress may be slow.  Each person’s body responds differently to the condition. A younger patient usually has a better outcome with regards to recovery.

In an older person, the goal is to achieve the highest level of independence possible to continue their activities from before. The concerns of the patient should be heard and the rehabilitation treatment should focus on his particular needs.

Apart from being one of the conditions that causes death in thousands of people a year, it also causes many disabilities in those who suffer from it.

We urge anyone who has suffered from previous problems with circulation to also pay close attention to the ways to prevent this condition.  Life is too precious a treasure to neglect it by excesses that affect your health sooner or later. It’s also very wise to address pre-existing conditions with proper medical attention.