Should You Drink Tea During Pregnancy?

Drinking tea is common although doing so during pregnancy could pose a risk. Continue reading to find out about the effects of certain herbal infusions. 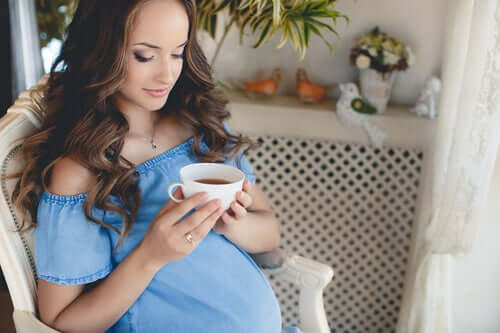 It’s common for women to drink tea during pregnancy as they try to relieve the discomfort that’s typical of their condition. However, they must be aware of the negative side effects that some herbal infusions could have on them.

People have been taking advantage of medicinal plants in the form of herbal infusions for centuries. However, many of the pregnant women who drink these concoctions are often unaware of the effect a given plant could have on them. Some herbs are of little consequence but they must be careful about certain plants.

Can you drink tea during pregnancy?

Having a cup of tea isn’t really harmful to a pregnant woman. The mere fact of drinking an infusion, in a timely manner, isn’t too consequential.

However, drinking teas made with specific medicinal plants often, and in excess, does pose a risk during pregnancy.

According to the estimates of a study, up to 55% of pregnant women drink herbal infusions. The scary part is most of them are unaware of the effects these plants could have on their baby.

A woman’s body undergoes temporary changes during pregnancy due to the appearance of new organic structures, such as the placenta. Thus, any substance, natural or synthetic, that could alter the physiological processes of this stage, is strictly contraindicated.

It’s important to say that the consumption of tea during the first trimester of pregnancy is the most relevant here. This is because fetal development is most sensitive to the influence of environmental factors during this stage.

In this respect, any drugs, chemical substances, metabolites of medicinal plants, or any disease, can affect and damage the normal development of the fetus from the second week to the third month of pregnancy. This, together with the properties of the various active metabolites, leads to many disorders.

Teratogenesis, cytotoxicity, genotoxicity, and other terms refer to the detrimental changes that the cells of embryos undergo during their formation. Pregnant women must be familiar with the substances that are most associated with these processes.

Just as alcohol or tobacco are chemicals that interfere with embryogenesis, medicinal plants can also have a negative impact on it. The fundamental thing here is to take precautions when consuming herbal infusions.

It may interest you: Lack of Appetite in Pregnancy

What kinds of tea can pregnant women drink?

Herbal products have broader therapeutic effects and fewer side effects than synthetic ones. Unfortunately, this fact has contributed to the perception that anything that’s natural isn’t harmful. Many of these plants don’t have a negative impact on the health of a pregnant woman, among them:

There are many other herbs that are safe during pregnancy but the ones we just mentioned are the most frequently used ones. Thus, there are no contraindications and pregnant women can take them with confidence — unless their doctor indicates otherwise.

Herbal teas that are NOT recommended

Just as some teas are safe to drink during pregnancy, there are plants you shouldn’t consume during this stage. These are the most relevant ones:

Read also How to Minimize Hypothyroidism During Pregnancy

Things to keep in mind if you drink tea during pregnancy

Most people believe that medicinal plants are safe because people have been using them since ancient times. Keep in mind that “natural,” doesn’t necessarily mean safe and wholesome.

Women who wish to take herbal infusions should consult their healthcare professional before, during, and after pregnancy and during breastfeeding. This is because many of the effects of plants on pregnancy are still unknown, including the good ones.