The second patient ever to have their HIV cured received a stem cell transplant, which is what made their recovery possible. This opens the door to a serious hope for a definitive treatment of this pandemic. 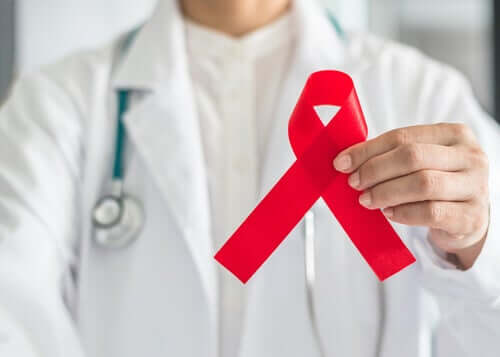 The news that a second patient had their HIV cured appeared for the first time in 2019. However, doctors didn’t dare to claim that it was definitive. However, now – one year later – the possibility that this cure was completely successful seems more and more likely.

The acronym HIV refers to the human immunodeficiency virus. Although people often confuse the term with AIDS, it’s not the same thing. HIV is the virus itself, while AIDS is the final stage of the infection. It means “Acquired Immunodeficiency Syndrome.”

HIV is a virus that attacks certain immune cells and destroys them. These cells are the CD4 T lymphocyte cells. They’re essential for your body’s functioning. This is because they’re in charge of stimulating and coordinating many of the cells of your immune system.

There are many people with HIV in the world. In fact, it’s estimated that around 39 million people are infected with the virus. Because of its importance, in this article, we’ll talk about the second patient cured of HIV and what the treatment was.

The story of the second patient cured of HIV

The second patient cured of HIV is called the “London patient“. The first case, named the “Berlin patient”, was declared cured around the year 2008. However, doctors are always very cautious when talking about curing the disease.

This is because HIV is a virus that stays in your body chronically. It destroys the CD4 T lymphocytes, weakening your immune system and preventing your body from responding to infections.

Plus, the stages of HIV are complicated. If it isn’t treated, it can turn into AIDS, which the stage where there is complete immunodeficiency. Until very recently, scientists thought that it was impossible to cure this infection.

Patients use antiretroviral treatments to keep the infection under control. This way, they reduce the risk of transmitting the virus and the number of copies that exist in your body. This has allowed people with HIV to have a better life expectancy.

How can a patient with HIV be cured?

Both the first and second patients cured of HIV were submitted to a stem cell transplant. For this particular patient cured of HIV, the transplant was to treat Hodgkin’s lymphoma. This procedure was done in 2016.

A stem cell transplant allows the donor cells to replace the cells of the sick person. However, if it had been a regular transplant, the patient would have continued to have HIV.

Nevertheless, the scientists decided to choose a specific donor. The donor had two copies of a genetic mutation in their white blood cells. This mutation made them resistant to HIV and unable to become infected. For this reason, as the stem cells started replacing the sick person’s cells, they became more and more resistant to HIV. The virus couldn’t enter the cells nor replicate itself in the body. Because of this, it ended up disappearing.

What does this mean for medicine?

After this intervention, the second patient cured of HIV has spent 30 months without taking their HIV treatment. In fact, there is no sign of infection in their body. Because of this, researchers are starting to confirm the cure.

This fact is a milestone in the history of medicine. HIV is an infection that continues to be one of the biggest health problems around the world. Although there are more and more treatments and ways to prevent it, it’s still a large cause of death.

The fact that there is now a second patient whose HIV was cured allows us to have a much more hopeful view of the future of research and possible treatments for this infection. It will just be a question of continuing the research to create more precise ways to tackle this challenge.

The Reproductive Cycle of Viruses
The reproductive cycle of viruses is a process in which they use a living being to multiply. Once viruses multiply, they damage the same organism to free themselves and multiply in another body. Read more »
Link copied!
Interesting Articles
Treatments
Advantages and Disadvantages of LASIK Surgery