Scoliosis in Children: Everything You Need To Know

Scoliosis in children is not a very common problem, but it does represent a condition that should be given due attention. How do you recognize it? How do you treat it? In this article we'll tell you everything you need to know. 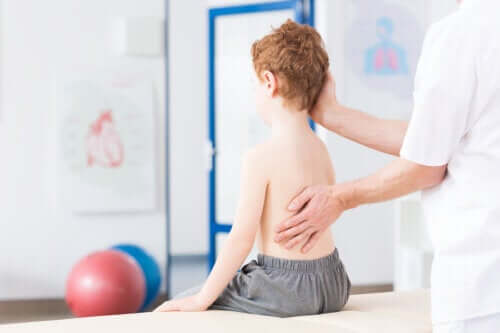 Scoliosis in children is a serious problem that should be treated as soon as a doctor diagnoses it. This name is used for any deformations of the spine that appear in minors and that can have different degrees of severity and compromise.

In general, scoliosis in children tends to worsen as they continue growing. A misleading aspect of this situation is that children and adolescents usually tolerate this problem very well. However, if you let it continue it may require highly complex treatments later.

The most common form of scoliosis in children is called “idiopathic scoliosis.” This occurs in 4 out of every 1000 people. Of those cases, approximately 1% will be severe and will require long-term treatment. Children should have at least one annual orthopedic consultation, especially when they reach puberty.

What is scoliosis in children?

Scoliosis in children is defined as a problem with the curve of the spine that occurs in children. In fact, the column has a curvature, but it’s more pronounced in some children, and can look like the letter “C” or “S”. This abnormality sometimes causes pain and difficulty breathing.

When a child suffers from scoliosis, the spine moves to one side. This problem can lead to bones turning or rotating. If this happens, one shoulder or one side of the hip may be higher than the other.

Overall, there are several types of scoliosis in minors:

In most cases, the cause of childhood scoliosis is unknown. However, we do know that it affects girls more than boys. According to the reason for it, scoliosis can be classified as follows:

Symptoms and diagnosis of scoliosis in children

Each child may experience scoliosis symptoms differently. Even so, some symptoms appear in numerous cases. They are as follows:

In most cases, scoliosis doesn’t cause pain or other similar symptoms. Doctors normally make the diagnosis from clinical observation and often accompany it with an MRI or computed tomography (CT).

Discover: Diagnosis and Treatment of Osteoarthritis of the Spine

The treatment of scoliosis in children depends on the age, the stage of growth of the child, the cause of the problem, the severity of the curvature, and the health of the child. Doctors also take into account their tolerance to available medications and therapies.

If the curvature is slight or the child is close to adolescence, usually they just do a follow-up to make sure that the condition doesn’t worsen. In these cases, or when the curvature is greater, they often use a corset. This prevents the curvature from increasing.

If the curvature is very pronounced, they may proceed to surgery to make the correction. If you don’t treat a severe case, it could lead to reduced lung capacity and the development of lung disease. Therefore, it’s a condition that deserves careful attention.

Symptoms of Degenerative Disc Disease
As you age, your vertebral discs deteriorate. This can lead to degenerative disc disease in some people. Read more »
Link copied!
Interesting Articles
Children
The Signs of a Spoiled Rotten Child