Respiratory diseases in newborns can be life-threatening. Thus, an early diagnosis is the key. 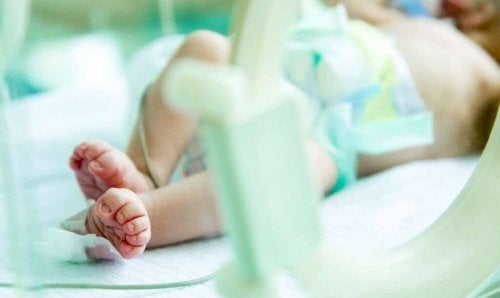 Babies are particularly vulnerable to certain diseases. This is why early detection will allow effective diagnosis and treatment to control problems such as respiratory diseases in newborns.

According to the study “Respiratory Disorders in the Newborn,” respiratory problems are quite common in newborns. This fact may seem surprising. These respiratory diseases in newborns require early treatment because they can be life-threatening. Today, you’ll discover some of the most common ones and how they can be treated.

This first of the respiratory diseases in newborns can affect the entire lung or only a part of it. The problem is that it causes an irreversible disruption of the alveolar septa, causing the air to disperse. This occurs spontaneously, usually in newborns who are receiving respiratory therapy. Sometimes, it manifests in babies who weigh a lot less than the recommended weight.

The most commonly used treatment is to place the newborn on their side (the one with the affected lung) to collapse it and promote healing. Also, doctors can insert an endotracheal tube into the unaffected lung so that the other can heal.

You should also read: Diseases in Newborns that Require Surgery

This respiratory disease is usually more common in premature babies. The problem is that the air becomes trapped in the peribronchial spaces, compressing the airways. That trapped air usually escapes into the areas between the lung and chest wall, which is known as pleural space. When this happens, the newborn’s skin usually looks bluish; this is known as cyanosis.

Experts consider this disease an emergency, as the chances that the newborn will die are quite high. The solution is usually to introduce a catheter into the baby’s chest to extract the air that escaped into the pleural space.

The third of the respiratory diseases in newborns lasts less than 24 hours. As in the previous case, the baby’s skin may turn blue. This is due to the liquid that’s still in their lungs. Although the baby eliminates much of the liquid when they breathe, sometimes, C-section or premature babies may have a hard time ejecting it.

The usual treatment is constant monitoring. Also, supplying the newborn with oxygen. Rapid breathing is a characteristic symptom of this disease. During treatment, the baby should intravenously receive fluids and nutrients.

Other respiratory diseases in newborns

We’ve discussed three very different respiratory diseases in newborns. However, due to the many problems that this type that many manifest, we’re going to summarize other diseases that may affect newborns.

Overall, these are some of the respiratory diseases newborns may suffer from. Early diagnosis is key to help doctors treat them. To do this, the medical team will request the necessary tests to decide on the best treatment.

How to Resuscitate a Baby
Babies are susceptible to accidents that endanger their lives. Knowing cardiopulmonary resuscitation techniques to resuscitate a baby is vital. Read more »
Link copied!
Interesting Articles
Illnesses
Can Celiac Disease Cause Infertility?